Christmas in Alsace: traditions and markets

Christmas in Alsace: traditions and markets

Christmas in Alsace is genuinely magical. This region has had a large influence over Christmas celebrations in France. The Christmas market is a long-standing tradition there. The proximity of Germany gives a ‘germanic touch’ that is much appreciated in France. The setting is perfect. Old half-timbered houses richly decorated, an abundance of fairy lights, classical concerts in local churches, good food and Christmas cookies and gingerbread. All combine to offer an unforgettable magical experience. And when it snows, you are treated to the traditional Christmas atmosphere!

The Seven ‘Christmas Lands’ of Alsace

The Alsatian tourist board has divided the region into 7 Christmas themed areas (Pays de Noël): 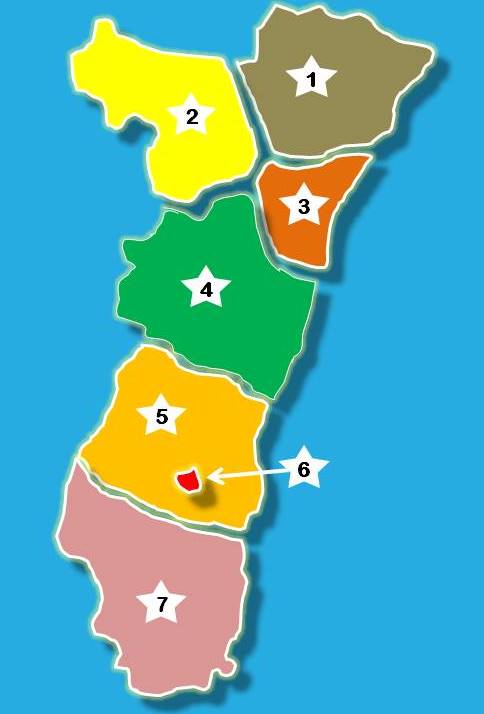 The Alsatian characters of Christmas

The three main characters of Christmas in Alsace are Saint-Nicolas, Hans Trapp and Christkindel. The locals know them well, and have respected and feared them since medieval times.

The benevolent figure of Saint Nicolas is celebrated on the 6th of December. A rather austere foreign bishop, Saint-Nicolas, quizzes the children on their behaviour before handing over a basket full of treats and toys.

Find out more about Saint-Nicolas.

The terrible bogeyman is portrayed with a blackened face. He wears a long beard and is dressed in a bearskin. His rod threatens the children, particularly the naughty ones. They can only count on the goodness of Christkindel. In neighbouring Germany, this sinister assistant of Saint Nicolas is known as Knecht Ruprecht. In Lorraine, he is equivalent to Père Fouettard.

According to the legend, Hans Trapp was a 15th-century knight. His real name was Hans von Trotha. The warmonger had a long fight with the abbey of Wissembourg. He resided in his castle of Berwarstein, situated in the southern part of the Palatinate Forest in the German state Rhineland-Palatinate. The war led to his ex-communication by the decision of the Pope. The Holy Roman Emperor Maximilian I had him banned from the Empire in 1496.

When the Reformation extended across the region of Alsace, the Protestant community replaced the catholic figure of Saint-Nicolas with another gift-bringer: Christkindel. Consequently, the date of giving presents was changed from 6 December to 25 December.

The angelic figure is represented by a young maiden whose face is whitened with flour. She wears a crown of gilt paper with lighted candles in it. Her hands carry a silver bell and a basket of sweetmeats: apples, gingerbread and nuts that she will give the well-behaved children.

The Christmas market of Strasbourg was initially known as the Saint Nicolas’ fair. At the time of the Reformation (16th century), the authorities renamed the popular event after the angelic gift-bringer (Christkindelsmärik).

The Christmas tree was born in Alsace!

There is now a consensus within the international society. The Christmas tree was born in Alsace. More precisely, in the little town of Sélestat, between Colmar and Strasbourg. It proves once again that Christmas is definitively a highlight in the region.

The first Alsatian Christmas trees were decorated with the following:

The Protestants and the Christmas tree

In the second half of the 16th century, the Reformation leaders refused to use a Nativity scene during Christmas. Thus they encouraged the development of the Tree tradition as it did not depict Jesus and biblical characters. This explained why the Christmas tree quickly spread throughout Northern European states of the protestant faith, such as Northern Germany and Scandinavia.

Let’s keep in mind that in the 16th century, Alsace was entirely part of the Germanic world, as were the neighbouring duchies of Lorraine and Austria. The tradition of putting up a decorated fir tree on Christmas Eve was kept alive throughout the 17th and 18th centuries. While in France, it never really broke through.

The Poles and the Xmas tree tradition

This would all change with Maria Leszczyńska, the wife of King Louis XV from Poland. She brought the tradition to Versailles with very little success.

But in the 1830s, the German daughter-in-law of King Louis-Philippe, Duchess Helen Louise of Mecklenburg-Schwerin, set up a Christmas tree into the Tuileries Palace.

However, it did not become a strong tradition among the population in France. The outcome of the Franco-Prussian war (1870-71) triggered the Christmas Tree tradition in the entire country of France.

This was due to the flock of immigrants fleeing from Lorraine and Alsace. Instead of opting to become German, they banned themselves from their homeland. They brought with them the Germanic tradition of the tree. By the 1930s, the Tree became part of Christmas celebrations in every French household.

England also had to wait until the early 1840s to see the tradition established in their country. Prince Albert, of German descent, was said to have put up a Christmas tree in Windsor Castle.

Read more about the French tradition of Christmas trees and Christmas decorations.

The Alsace region is the birthplace of Christmas markets in France. This is where you’ll find the oldest and some of the most traditional markets!

The Strasbourg Christmas market is a vast outdoor public space spread all over the Old Town which sells anything to do with Christmas. It is locally called Christkindelsmärik (Marché de l’Enfant Jésus).

Strasbourg’s Christmas market is the oldest in France and Europe, dating back to 1570. At the time, the Alsatian capital was not even French. In Alsace, it is locally known as the “Christkindelsmärik” and takes place in the Old Town.

Other Xmas markets in Alsace

Other renowned Christmas markets are those of Sélestat, Colmar, Eguisheim, Kaysersberg, Mulhouse and Riquewihr. Most of Alsace’s little towns and villages hold markets of this sort. They seem to compete with each other for the best illumination and Christmas atmosphere.

The streets are adorned with sparkling decorations, animated facades, and illuminated monuments. Pretty little wooden stalls (called châlets) are set up in the centre of most Alsatian towns. They are individually and carefully decorated and illuminated to spread the enchanting atmosphere of Christmas in Alsace.

Alsatian Christmas markets often occur in a town’s main square or street. The local council organises them with pride. The Holiday season officially starts on the first weekend of Advent – that is, 4 Sundays before the 25th of December.

A true Alsatian Christmas market displays the Christmas nativity scene. And, of course, has a majestic illuminated Christmas tree in its centre!

The fine aromas of mulled wine (with scents of cinnamon, orange and spices) and roasted chestnuts perfume the atmosphere. The craftsmen in the chalets offer authentic goods, especially for the Christmas season:

The Christmas markets of the villages along the Alsace Wine Route are hugely popular. Roads and streets can become congested with the flow of visitors on weekends in December.

In addition to the famous Christmas markets, numerous events occur during Advent throughout the region of Alsace. Here are a few examples:

Most of the towns in Alsace have the streets of their historic centre richly decorated and lit up for Christmas. Some of the beautiful old façades show a fantastic display of Christmas decorations. It has become a tradition for Alsatians to stroll at nightfall along the enchanting streets of their towns.

Many towns and villages organise a Saint-Nicolas parade or at least the coming of the Patron Saint in schools.

The town of Sélestat runs a little parade of the Christmas tree along the streets of its historic centre.

The Midnight Mass is a dear tradition followed by many Alsatians. On Christmas Eve, one of the beautiful churches in the region host the traditional Christmas Mass.

In the little town of Thann (Haut-Rhin), Santa climbs down the bell tower of the Collegiate church. Then he gives away sweets to the children. Called “Le Père Noël escaladeur“, this is the only place in Alsace where Santa abseils from the top of a church accompanied by his elves.

Read more about Christmas in Thann.

In Guebwiller (Haut-Rhin), an original yet creative event called “Blue Christmas” distinguishes the town from the popular Alsatian destinations. The Noël Bleu mixes traditional Christmas illuminations with mapping video (projections on buildings and monuments). In doing so, the event aims to emphasise the rich architectural heritage of Guebwiller.

Read more about Christmas in Guebwiller.

To the North of Alsace, on the border between France and Germany in northern Alsace, lies the little town of Wissembourg. This is where two legendary characters of Christmas appear at nightfall:

Wissembourg belongs to the land of Christmas mysteries.

Just before Christmas, the town organises a top-rated event in the streets of the old town. This is the night parade with torches, where Hans Trapp makes a dramatic and loud entrance with his companions, the robber knights. Distraught monks precede them, alerting the inhabitants of their coming. Fortunately, Christkindel arrives in her bright float to pull back the forces of darkness. Lights, rolls of drums, costumed actors, handing out of treats… this unique event attracts thousands of visitors and ends with a firework display.

A walk to the Berwarstein!

After Christmas, it is tradition to walk from Wissembourg to Berwarstein Castle in Germany. The fortress used to belong to the robber baron. The Visitor Centre of Wissembourg organises the traditional 16 km long walk, locally called “Marche du Hans Trapp”. It ends with a medieval meal in the castle’s knight room.

In addition, Wissembourg hosts its own Christmas market located along St. Pierre and Paul Abbatial Church.

In the little town of Altkirch in the Sundgau, there is no Christmas market organised. Instead, the Enchanted Forest serves the town right, with fir trees spreading throughout the old town centre, creating a fantasy world of ancient local tales and legends.

Read more about Christmas in Altkirch.

Each year, churches and local associations organise several concerts and musical events known as “Les Noëlies”. They take place throughout the region and include choirs, brass bands, Alpine horn players, Carols… You can hear them in public squares or churches.

A few towns (Altkirch, Colmar, Obernai, Saverne) have a temporary ice-skating rink set up right in the centre of town during Advent. In Mulhouse, a 30 metre-high Ferris Wheel once overlooked the Christmas market and the main monuments and buildings of Place de la Réunion. These additional entertaining structures contribute to the festive atmosphere of Christmas. But they do not represent traditional elements of Christmas in Alsace.

The Gastronomic traditions of Christmas in Alsace

The region of Alsace benefits from rich gastronomy, which is much appreciated during the Holiday season. From Foie Gras to Kugelhopf, gingerbread and little Christmas cookies… The Alsatian gastronomic traditions will enchant young and old alike on their visit to one of the many Christmas markets.

Read more about the Christmas gastronomy of Alsace.