Of all the Royal Châteaux in France, Blois is certainly not to be missed when visiting the Valley of the Loire. Located in the very centre of town, this former residence of 7 Kings and 10 Queens of France is indeed a place where the visitor has an appointment with French history.

It makes no doubt that Blois Castle, organised around the main courtyard, is a fabulous palace with several wings totaling 564 rooms and 75 staircases, 100 bedrooms and a fireplace in each room! Reminiscent of the power and daily life at court in the Renaissance, the royal residence also hosts Blois’ Fine Arts museum and many temporary exhibitions in the magnificent royal apartments.

The Castle of Blois: a bit of history

From the 10th to the 13th centuries, Blois was the place of residence and seat of power of the Counts of Blois.

Blois Castle in the Middle Ages

In the 10th century, Theobald I inherited the title of Count of Blois. This title had long before been bestowed by the Carolingian kings, but the power linked to the title had been freed from royal influence such that its transfer had become hereditary. An ambitious man, Theobald I pitted himself against his neighbours and protected his territory by building fortifications, including a large stone tower at Blois.

His descendants, Odo I and Odo II, pursued the same objective of power and were engaged in conflict with King Hugh Capet and the Count of Anjou.

The powerful lineage of the Counts of Blois was also distinguished by its close ties to the royal bloodlines of Western Europe and by the family’s participation in the Crusades. In 1081, Stephen II Henry married Adela of England, the eldest daughter of William the Conqueror, and served as one of the leaders of the First Crusade.

Theobald the Great united Champagne with Blois in 1125, thus becoming second in line to the throne, while his brothers Henry and Stephen became respectively the Bishop of Winchester and the King of England, respectively. Louis de Blois, a leader of the Fourth Crusade, formed an alliance with Richard the Lionheart to fight against the King of France. However the countship lost some of its influence when it passed into the hands of the House of Châtillon-sur-Seine, a leading Burgundian family.

In 1392, the countship of Blois was yielded to Louis de France, the founder of the House of Orléans, who took possession of the countship in 1397, upon the death of the last heir of Châtillon. Louis de France (also known as Louis I of Blois) wielded a great deal of influence over his brother Charles VI, King of France, who went insane in 1394. This influence, along with Louis’ strategy for the accumulation of power based on land acquisition, caused him to be murdered by John the Fearless, Duke of Burgundy.

His eldest son, Charles of Valois (Charles d’Orléans), who had inherited the family home, was living there when he was taken prisoner by the English, who had taken advantage of the conflict between the Orléans and Burgundy dukedoms to launch an attack on France. Twenty-five years of imprisonment in London strengthened Charles of Valois’ taste for poetry, at the expense of his political ambitions. Then a widower, he remarried the very young Maria of Clèves, replaced part of the Blois fortress with more comfortable accommodations and assembled a court of artists and literary figures.

His new wife bore him a son who became Louis II, Duke of Orléans and Count of Blois, at a young age. In order to eliminate this potential political rival, King Louis XI forced him to wed his daughter, Joan of France, who was deformed and barren. The impetuous Duke of Orléans went to war against his cousin Charles VIII, then escaped from Blois and sought refuge with the Duke of Brittany. After a period in the royal jails, he finally gained the favour of Charles VIII. Upon the death of King Charles VIII, whose two sons had already passed away, Louis II was crowned King of France and took the name of Louis XII.

Blois: a Palace for the Kings during the Renaissance

The royal estate of Blois and its château became the preferred residence of the Kings of France during the reign of Louis XII, who added a wing to the property. Francis I (François Ier) also added a wing, and Francis II lived there for half of his reign. During his involvement in the French Wars of Religion, Henry III held the Estates General there twice, as well as had the Duke of Guise killed. During the 16th century, the Queens of France also left their mark on Blois’ history. The plums in the garden take their name from Anne of Brittany, whose marriage to Louis XII had allowed the unification of Brittany and France. Mary Stuart had been raised at the estate and spent her winters there with her husband, Francis II, King of France. Catherine de’ Medici, the wife of King Henry II, lived and died there. The Château of Blois was also inhabited by the two queens of Henry IV, Margaret of Valois and Maria de’ Medici. The latter escaped from the estate in 1619. She was one of the princes and princesses in exile who found refuge there during the 17th century, including Gaston of France (Gaston d’Orléans) and Marie Casimire of Poland.

In 1626, Louis XIII bestowed Blois upon his brother Gaston as a wedding gift. After the death of the latter in 1660, the château remained abandoned for nearly 130 years. In 1788, it was used as a barracks, and then was pillaged during the Revolution. Plans were made to raze it several times, but in 1840, thanks to the influence of Prosper Mérimée, the Château of Blois rejoined the list of historical monuments and was restored by Félix Duban. Since that time, it has undergone a series of restorations, notably after being damaged in an air raid during World War II. Some of these restorations are still underway. The castle accommodates numerous museums and welcomes more than 250,000 visitors each year; today, it is the property of the town of Blois.

The success of the Château of Blois as a tourist attraction is largely due to its incorporation of the different architectural styles of the châteaux of the Loire Valley.

Blois: an architectural synthesis of the Loire Valley châteaux

The principal elements of the Château of Blois are a medieval castle and three wings that draw from different styles: gothic, Renaissance and classical, with some medieval components.

The oldest part of Blois Castle

The oldest part is the medieval castle, North of the wing built by Francis I. It houses the oldest example of Gothic style secular hall in France: the Salle des États (Hall of States), built in 1214 by order of Theobald VI. Its 30-metre length and 18-metre width allowed it to accommodate the Estates General of 1576 and 1588. The current décor is the work of restorer Félix Duban, who was inspired by the polychromy of the 13th century to depict 6,720 fleurs de lys on the panelling. The windows by stained glass artist Paul-Charles Nicod portray the emblems of Louis XII and Anne of Brittany. Two other important medieval elements of the château are the lapidary museum and the Tour du Foix.

Although it was built just 12 years later, the wing added by Francis I is more clearly marked by the Italian influence in its lines, its layout and its ornamentation. Gaston d’Orléans demolished a quarter of the wing (including the private rooms of Francis I) but it was rebuilt by Félix Duban, who adhered to the principle that, although the public rooms usually face a château’s courtyard, the private rooms face the gardens, which today no longer exist at Blois. The queen’s rooms are located on the first floor.

As for Gaston d’Orléans’ wing, it is in the classical style. The three bays of its central forecourt display an overlapping of the Doric, Ionic and Corinthian orders, and its central pediment includes sculptures depicting Minerva and Mars. The uncompleted side of this wing, due to an interruption of funding during its construction, leaves many château enthusiasts with a sense of regret.

However, the incompletion of this wing doesn’t make it any less a part of the synthesis of architectural styles of the châteaux of the Loire Valley that is the Château of Blois.

Louis XII was the first Count of Blois to add a wing. Its red bricks are encircled with white stones in a Franco-Flemish style. An equestrian statue of Louis XII dominates the entrance. A number of its elements – mouldings, trefoils, corbelling – are in line with the shift into Flamboyant Gothic architecture, while others – ornate columns, depressed arches, pillars decorated with arabesques – already reflect the Renaissance style. Dormer windows break up the slate surface of the wing’s tall roofline in order to illuminate its attic living space, in the late gothic tradition.

Today, this wing houses Blois’ Fine Arts Museum. The Flamboyant Gothic-style tower, attached to the wing by Louis XII, is the Tours des Champs. The only part of the chapel that survived was the gothic choir; the gallery of Charles d’Orléans was also partially destroyed.

The equestrian statue of King Louis II carved at the entrance of the Louis XII wing is a concept that has been copied by Antoine, Duke of Lorraine, in his Ducal Palace in Nancy. 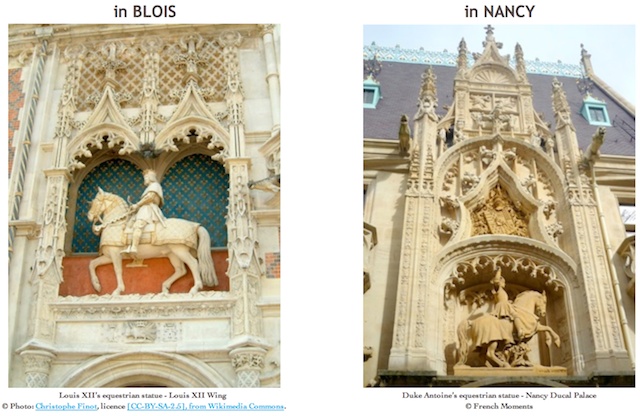 For some reason, Duke Antoine had spent part of his childhood in the Château of Blois. Later on, he took part in the battle of Pavia in Italy and came back to Lorraine with the ideas of Renaissance. All this explains the striking resemblance of the Palace’s portal with that of Blois. Duke Antoine was not afraid of plagiarism: he simply commissioned an equestrian statue of himself carved in a niche surrounded by a segmental arch.

The official website of the Blois castle for more information about your visit.