In this article, I have chosen to tell you about the village of Bédoin, where we stayed for a fortnight in Spring. Situated at the foot of Mont Ventoux, the village benefits from many tourist assets. Here is a small summary of our stay in this little corner of paradise. Between vineyards, cherry orchards, lavender fields and pine forests… Provence the way we like it!

Contents hide
1 My discovery of the Provençal village of Bédoin
1.1 The village centre
1.2 The Saint-Antonin hill
2 Mont Ventoux and its forests
2.1 A bald mountain!
2.2 Bédoin, a must for cyclists
2.3 The first ascent of 1336
3 The markets of Bédoin
3.1 The farmers’ market
4 What to see in the vicinity
5 Find out more!
5.1 Where to stay in the region
5.2 Inspired? Pin it for later:

My discovery of the Provençal village of Bédoin

Bédoin is a small town of about 3,100 inhabitants, situated at an altitude of 300 metres at the foot of Mont Ventoux.

From Carpentras, it is reached by the D974 which crosses the Comtadine plain. Along the road, vineyards and orchards of cherry and olive trees follow one another for the pleasure of the eyes.

Not far from our gîte © French Moments

On our walk to the village centre © French Moments

We have chosen a gîte situated 2 km from the village centre. A pretty location near the vineyard and on the edge of the woods.

From our first visit, we understood that the Avenue Barral des Baux was the backbone of Bédoin.

The town’s shopping street is lined with venerable plane trees. There are restaurants, shops, bakeries…

The historic centre starts west of the avenue. With its narrow streets with colourful facades, the old town occupies the slopes of the Saint-Antonin hill.

The hilltop village and its church © French Moments

A Provençal atmosphere is guaranteed on every corner.

In the old part of the village © French Moments

Not forgetting the fountains!

One of the fountains in the old village centre © French Moments

The streets converge towards the Saint-Pierre church. The imposing Catholic sanctuary was built between 1708 and 1736. Its façade was designed in the Jesuit style.

The square bell tower is surmounted by a wrought iron campanile.

The church was under renovation at the time of our visit to Bédoin. The scaffolding was hiding the bell tower…

Here is a picture showing the church before the works:

The site of the old castle occupies the top of the hill, of which almost nothing remains. Except for a few sections of the old medieval ramparts.

The hill is called colline Saint-Antonin.

The view of the surroundings and the Mont Ventoux is superb.

I particularly like the views over the roofs of the village with their typically Provençal tiles.

Mont Ventoux and its forests

Of the 9,100 hectares or so that make up the commune of Bédoin, 6,280 ha are covered with forests. It is one of the largest communal forests in France. It extends between 350 and 1,900 m in altitude.

The forest is famous for its cedar trees, for its Austrian black pines, but also the 1,000 species of plants listed on the mountain.

Mont Ventoux, for its part, peaks at 1,910 m. Nicknamed the Giant of Provence, it has the particularity of being “bald”.

Hmmm, that is to say?

Well, as you can see in the photo, the summit of Mont Ventoux is bare of vegetation.

This character trait makes it a symbol of Provence, easily recognisable (especially from Avignon).

During a visit to Vénasque, a lady accosted me to ask me the question :

“Is it snow that you see on the summit of Mont Ventoux?”

Not at all, dear! It is not snow (in the summer) but limestone. In fact, the summit owes its vivid white colour to the many scree stones that make it up.

Bédoin, a must for cyclists

This is what you may have discovered on TV while watching the Tour de France. The cyclists climbed it 16 times (and will be back in summer 2021). It offers a windfall of publicity for tourism and the local economy. 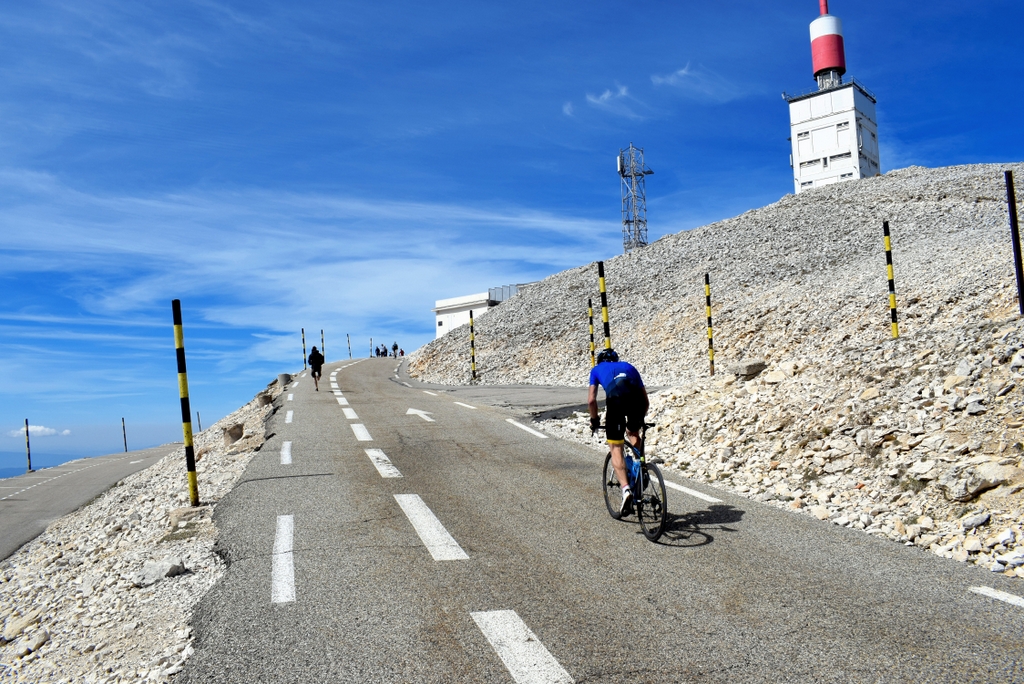 In summer, the population of the commune thus increases from 3,000 to 12,000 inhabitants!

Back in Bédoin, cycling is the sports activity par excellence!

Cycling is a favourite sport in Bédoin! © French Moments

What could be more normal since it is the starting point for cyclists who want to try the ascent of the Giant of Provence?

Sportsmen and women who are going to face its most difficult face:

The first documented (pedestrian) ascent of Mont Ventoux dates from 26th April 1336. The mountain was climbed by the Florentine poet Pétrarque (1304-1364). As for my first ascent, it dates from May 16, 2019! I couldn’t stay in Bédoin without climbing the mythical summit!

At the top of Mont Ventoux © French Moments

I chose to climb to the summit on a sunny morning. To discover a breathtaking panorama from the Provencal plains to the snow-capped peaks of the Alps in the far distance.

This is an activity that Rachel and I love to do.

Going to the market.

The one that is set up on the streets and squares of a village has become pedestrian for the occasion.

The Bédoin market is considered to be one of the most beautiful in Provence.

It takes place every Monday morning and brings together many local producers and artisans that offer a wide range of seasonal farm produce and crafts, including hand-made soaps and colourful tablecloths.

Saucissons at the market © French Moments

This weekly market is completed in the tourist season by a farmers’ market on Saturday evening.

Just look at that:

At the market of Bédoin, Provence © French Moments

Melons and carrots at the market of Bédoin, Provence © French Moments

Carpentras strawberries at the local market of Bédoin © French Moments

Local cherries at the market of Bédoin, Provence © French Moments

On the way out of the market, we would pass by the local boulangerie for some delicious French bread before heading back home.

The boulangerie Olivero… their bread is divine! © French Moments

Under a late afternoon sun, we would set the table “à la bonne franquette” (casually, without fuss) with all the food and wine we gathered from the market.

And for a moment, experience the great “joie de vivre” of Provence.

What to see in the vicinity

We have chosen to stay in Bédoin to take advantage of its central position in the Vaucluse département.

The village is close to some remarkable sites… some examples:

In the historic village of Pernes-les-Fontaines © French Moments

Having a good time in Avignon! © French Moments

Vaison-la-Romaine and its Roman remains

Vénasque, one of the most beautiful villages of France

Vénasque, one of France’s most beautiful villages © French Moments

L’Isle-sur-la-Sorgue and its Little Venice allure 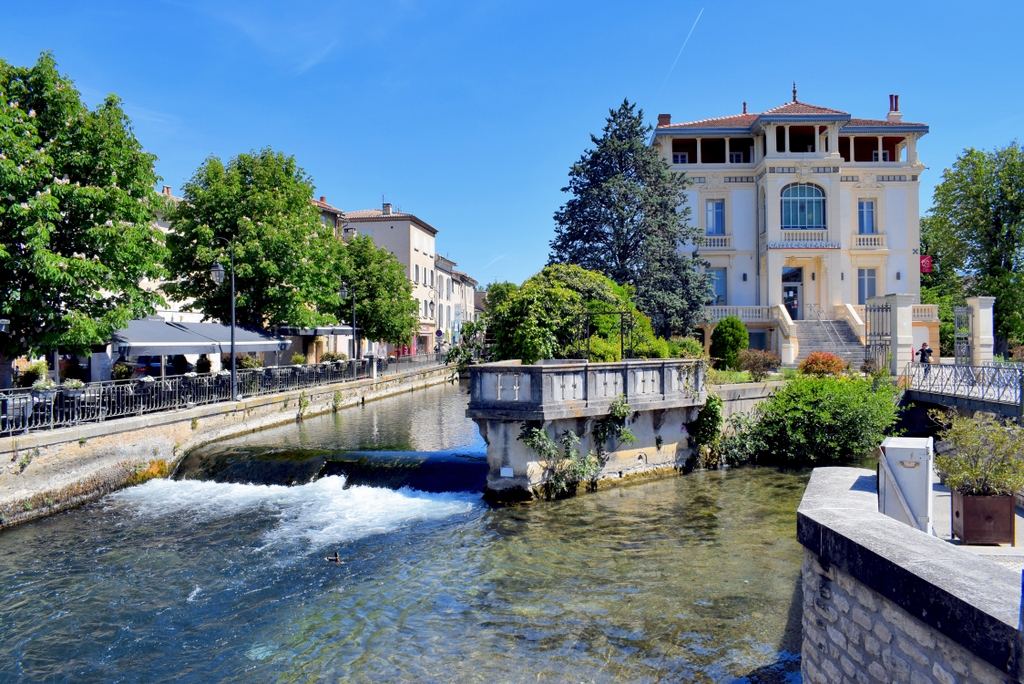 The hilltop village of Gordes 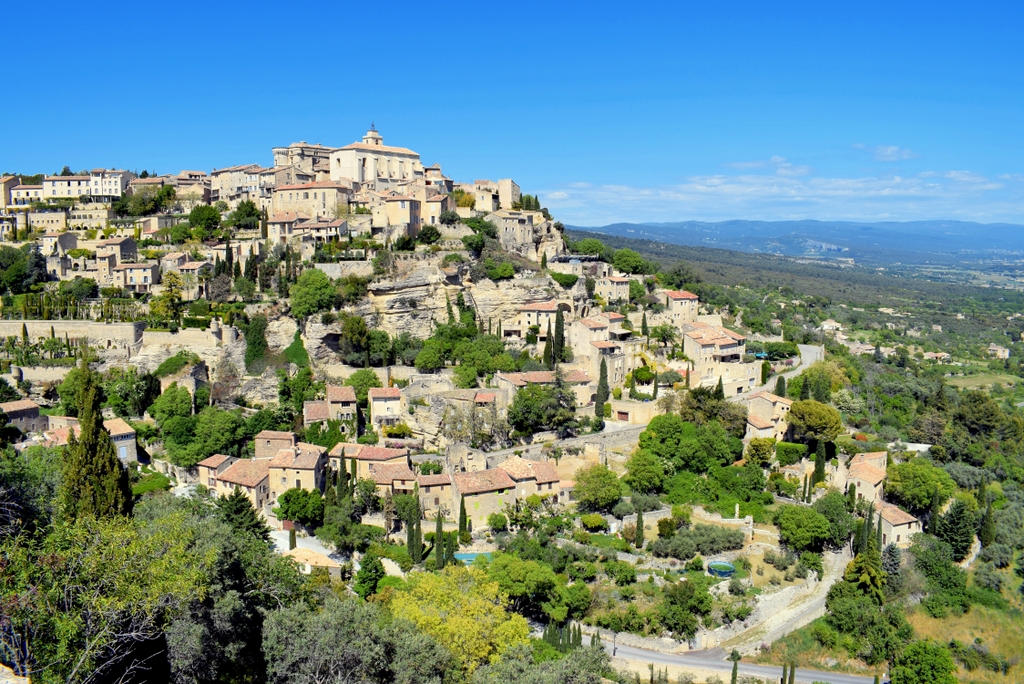 In the Provençal village of Flassan © French Moments

Near the hamlet of Les Baux (commune of Bédoin), you will find the famous “demoiselles coiffées” (the ladies wearing hats). These strange rock formations are located in an old ochre quarry.

Where to stay in the region

Some addresses (affiliated links) on accommodation in the region (centred on Bédoin):

If you find that my articles please you or have done you a favour, please feel free to share them on Twitter or Facebook or subscribe to my Patreon page (see more info below!) MERCI!