Why you should see the Annecy Lakeshore

Why you should see the Annecy Lakeshore

The Annecy Lakeshore is one of the most beautiful sites to discover in the French Alps. The stunning setting of the lake front is unforgettable: from the blue-green waters to the snow-capped mountain of La Tournette and the sharp rocky ridges of the Dents de Lanfon, the view from the lake front of Annecy deserves all the attention it arouses.

Situation Map of the Annecy Lakeshore

The Jardins de l’Europe, Pâquier and Parc de l’Impérial are situated to the east of the old town of Annecy along the northern tip of Lake Annecy. 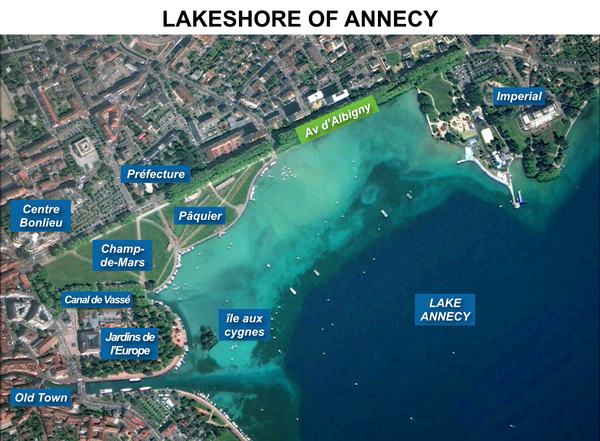 In the past, the site of the gardens was a marshy area situated outside the walls of the city. From 1602, the area was established as a promenade area by Duke Henri de Genevois-Nemours. In the aftermath of the annexation of the Duchy of Savoy by France, the municipal council decided to create an English garden, according to plans drawn up by Henri Porreaux where 650 trees and 1,000 shrubs from Europe, America and Asia were planted. By the trees are small plaques containing their names. In the gardens, huge sequoias and a ginkgo biloba can be admired.

A small artificial island with the romantic name of Île des Cygnes (Island of Swans) adds to the peaceful atmosphere of the place.

Facing the Île des Cygnes, the Berthollet monument is dedicated to the illustrious chemist (1748-1822) born in Talloires, who was first to develop a solution of sodium hypochlorite as a modern bleaching agent.

One of the quays is named after Emperor Napoleon III who gave the town a steam boat, the Couronne de Savoie. A commemorative plaque recalls this event in Quai Napoléon III, one of the very few monuments in France dedicated to the emperor.

By the embarkation point for the lake cruisers, there is a pretty view over the castle of Annecy from Quai Napoléon III.

Linking the Jardins de l’Europe to the lawns of the Champ-de-Mars, the Pont des Amours is another famous monument in Annecy, and arguably its most romantic spot. The footbridge is placed where the peaceful Vassé Canal and its small wooden boats join Lake Annecy. A fine example of the iron architecture of the Belle Époque, the Pont des Amours offers on the other side a fine view over the wooded Île aux cygnes, the lake and the surrounding mountains. Legend has it that when two lovers kiss in the middle of the Pont des Amours, the couple will be united for life.

At the end of Promenade Jacquet there is a merry-go-round dating from 1901.

The Pâquier and Champ-de-Mars in the Annecy Lakeshore

Close to the water, an orientation table enables the visitors to identify the surrounding mountains rising above the lake.

Along the shore canoes, boats and pedal-boats can be hired for a paddle on the lake.

The Avenue d’Albigny and its line of plane-trees lead to the Imperial Garden, located on the Albigny peninsula.

The imposing white building standing in the middle of the peninsula is the Imperial Palace. Opened in 1913, it houses a luxury hotel, a convention centre and a casino.

The beautiful garden around the Imperial Palace is shaded by beautiful trees.

The main beach of Annecy is also located in the peninsula.

Préfecture of Haute-Savoie by the Annecy Lakeshore

The great edifice of the Préfecture of Haute-Savoie was designed in Louis XIII revival style and resemble a French château. The Préfecture was built between 1861 and 1864 as a new architectural style introduced in Annecy after the annexation of Savoy to France. When Annecy joined France in 1860, it became the chief-town of the new département of Haute-Savoie.

At the time of completion, the Préfecture was the largest building on the lakeshore. The park of the Préfecture has been labelled a ‘remarkable garden’ since 2003.

With its neo-classical architecture, the Town-Hall of Annecy is a typical example of Sardinian style. It was built during the reign of Victor-Emmanuel II, then king of Sardinia. The ochre colour in the upper parts of the façade softens its austere feature and allows for the decorative elements to be more visible.

The reflection pool on the square in front of the Town-Hall was designed by architect Jean-Michel Wilmotte in 1995.

Check out the website of the Tourist Information Centre for more info about staying in Annecy. You can book your accommodation via their website: check it out here.