The imposing Annecy Castle in Haute-Savoie is majestically placed atop one of the last promontories of the Semnoz Mountain overlooking the lake with the old town of Annecy nestled at its foot. Its silhouette can be seen from various parts of the town as a beacon of the medieval past of Annecy.

Annecy Castle: a bit of History

In the 8th century, a fortress used to stand on the hill overlooking the site of Annecy. The raised location of the castle was perfect to guard the route linking Geneva to Italy at the outlet of Lake Annecy where bridges crossed the Thiou River.

The first written mention of the castle dates from 10 October 1219 when the Counts of Genevois (a junior branch of the House of Savoy) made the fortress their residence following their eviction from Geneva by the Prince-Bishop.

The Annecy castle was entirely destroyed by fire on 27 April 1340 and was subsequently rebuilt as it was before by Count Amadeus III of Geneva.

In the 16th century, the castle became the residence of the Dukes of Genevois-Nemours who worked on a series of alterations and reworkings in the 16th century which added to the castle’s medieval defensive architecture and French Renaissance features.

On  20 May 1630, the Annecy castle was taken by the French army led by Marshal Chatillon,  despite the resistance of Governor Louis de Sales. At that time, French King Louis XIII spent a few days in the castle.

When the last heir of the Genevois-Nemours dynasty died in 1659, the castle was given to the Duke of Savoy who made it the residence of the Annecy Governor.

After being abandoned in the 17th century, the castle was then occupied by a garrison until 1947. In 1902, it was listed as an Historical Monument by the French State. In 1953, the Town of Annecy acquired the castle and three years later the first exhibition was organised within its walls. Today, the castle houses the museum of regional art and the Alpine Lakes Regional Observatory.

Description of the Annecy castle

The complex of the Annecy castle is comprised within a polygonal  55 metres by 125 metres which follows the shape of the rocky outcrop. Access to the castle was by the current entrance gate, protected by a portcullis and a drawbridge which spanned a moat which today has been filled in.

The courtyard is surrounded by many buildings including towers and lodges. 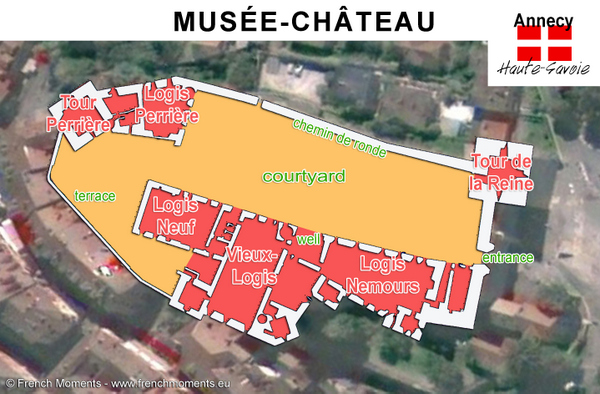 The Queen’s Tower, built in the 13th century, is the oldest part of the castle. The most vulnerable side of the fortress required the construction of a strong tower. With its 4 metre thick walls and 38 metres tall, it is  intersperced with arrow loops. The tower was accessed at the level of the curtain wall at 13 metre high.

The two towers of St Peter and St Paul, dating from the 13th century, flank the Old Lodge on each side. The St Peter tower is the only tower which has kept its entire crenellations and machicolation. In the 25 metre tall St Paul tower, Amadeus VIII had a mirror installed to keep a watch over his enemies, which gave the tower its nickname: “Tour du Miroir” (Mirror Tower).

Situated on the north side of the castle, the 13th century Old Lodge is flanked by the two towers of St Peter and St Paul. The building was reworked in the 15th century and a stone spiral staircase gives access to the different levels of the lodge.

On the ground floor a 40 metre-deep well can be seen, sheltered under an arcade together with the old kitchens (which have retained their two fireplaces), the “Grand Pêle” a room with fourteen columns supporting the “Grande Salle” located directly above it on the first floor.

The “Grande Salle” on the first floor is the ceremonial room of the castle. Dating from 1333, it was adorned with frescoes, tapestries and a great fireplace. The mullion and lattice windows were added between 1340 and 1345. The room was renovated in the 16th century to feature a fine coffered ceiling commissioned by Amadeus VIII. The “Grande Salle” was used for sumptuous feasts and this is where French kings Henri IV and Louis XIII were once welcomed during their stay in Annecy.

Its dimensions (13 metres by 25metres) make it an ideal setting for municipal receptions and other cultural events.

The room connects with the castle’s apartments.

To the left of the Old Lodge, the Nemours Lodge was built between 1533 and 1565 by Charlotte of Orléans-Longueville, Duchess of Genevois-Nemours. The facade is flanked by an angled turret which is a reminder of the Renaissance châteaux of Île de France and the Loire Valley whih the Duchess knew of.

In one of the rooms, a painted frieze can be seen along the top of the walls.

Latrines are found on every floor of the Nemours Lodge. In the 16th century, the castle benefited from a great interest in toilets whilst the Court of Louis XIV in the 17th century did not do so. In the castle, some latrines were intended to seat at least two or three persons.

Today, the museum is comprised in the rooms of the Old Lodge and the Nemours Lodge.

The New Lodge, with its austere façade, was built between 1562 and 1571 by Duke Jacques of Genevois-Nemours as a garrison to the right of the Old Lodge. The building was cut in half to lay out the terrace at the foot of the Perrière Tower.

To the south-east of the castle, the Perrière Lodge was completed in 1487 and is flanked by the massive Perrière Tower. Called “Logis du Gouvernement” (Government Lodge) in the 18th century, the lodge was added to the adjacent tower to house the administrative functions of the counts.

The grand tower which overlooks the lake  guarded access to Annecy from the route to Italy. It was built in 1445 by Duke Louis I of Savoy on the site of the keep of a former castle destroyed by fire. The 33 metre tall tower served as a prison during the French Revolution.

Between the Queen’s Tower and Perrière Lodge, the chemin de ronde was restored in the 16th century.

The peaceful and wooded terrace of the castle offers a pretty view over the closely intertwined roofs of the old town, its narrow streets, the lake and the surrounding mountains.

Collections of the Museum of Regional Art

The restored rooms of the castle house the permanent collections of the Museum of Regional Art as well as temporary exhibitions.

The museum also displays paintings of the 18th, 19th and 20th centuries in relation to the Alps and more contemporary pieces of art.

The ORIA (Observatoire Régional des Lacs Alpins) is housed in the Tower and Logis Perrière and comprises over 700 square meters of exhibition area. It aims to educate the general public on the protection of the natural alpine environment.

Visitors are faced with the complex, fragile and coveted environment of the alpine lakes (mainly Lake Annecy, Lake Bourget and Lake Geneva) through original museography which has been organised around five fields of scientific research: biology, ecology, ethnology, archaeology and limnology.