New posts
You are at:Home»Blog»A walk from Montparnasse to the Ecole Militaire, Paris

Although cold, winter in Paris is still stunning with lots of beautiful things to discover. Last Sunday, the weather kept switching between clouds and sunshine so we decided it would be a great opportunity to walk from Montparnasse to the Ecole Militaire (approximately 2.5 kms). And hopefully get a great shot of the Eiffel Tower with the beautiful pastels in the winter sky. Fortunately we were blessed with a few sunny moments, ideal for taking photos! Here is a small wrap-up of the walk with a few of the pictures we shot…

A beautiful Walk from Montparnasse to the Ecole Militaire 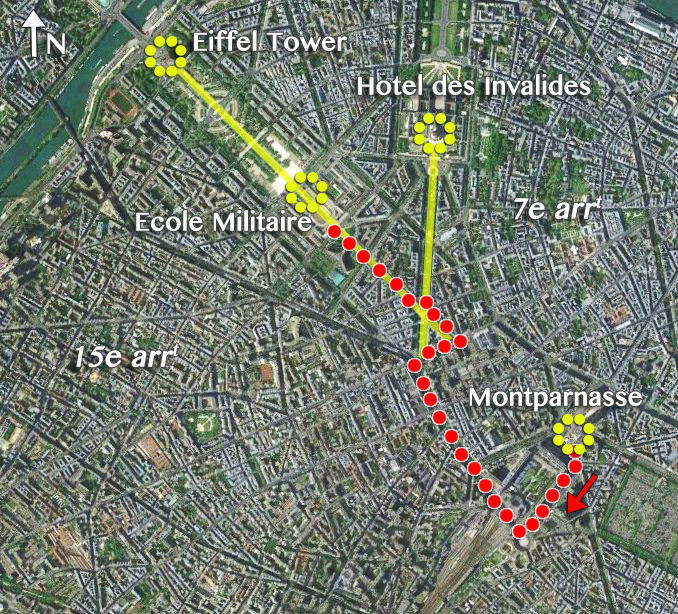 Once in Boulevard Pasteur, there is a fine view over the Eiffel Tower. There we understand that Montparnasse is actually a hill (therefore “Mont” in French) as the boulevard slopes down slightly.

There are some nice Haussmannian buildings along the boulevard which was opened in 1863. From the métropolitain station “Pasteur“, the metro line 6 is running above ground along a viaduct above the street.

Once in Place Henri Queille (near métro station Sèvres-Lecourbe), a great perspective opens onto Avenue de Breteuil ending in the Hôtel des Invalides and its golden dome. Between its two runways, the large avenue features a central lawn. Created in 1782, it takes its name from François Victor Le Tonnelier de Breteuil (1686-1743), a minister under Louis XV.

The dome of the Invalides, Paris © French Moments

Turn right on Rue de Sèvres and after a few meters you will reach Avenue de Saxe. You will find yourself at the starting point of another perspective leading to the Pasteur monument in Place de Breteuil, the Ecole Militaire and the Eiffel Tower.

Place de Breteuil lies at the crossroads of Avenue de Breteuil, Avenue de Saxe, Rue Valentin-Haüy and Rue Duroc. The monumental statue at its centre depicts Louis Pasteur and was sculpted by Alexandre Falguière in 1904. The square offers a remarkable vista with two perspectives: one leading to the Eiffel Tower and the other to Les Invalides. Behind you can be seen the top of the Montparnasse Tower.

Continue your walk along the shady Avenue de Saxe which owes its name to Maurice de Saxe (1696-1750), Marshal of France under Louis XV. There is a lively open-air market happening there on Thursday and Saturday mornings.

The avenue leads to the entrance of the Ecole Militaire in Place de Fontenoy with railings closing the vast complex. The military school was founded in 1750 by Louis XV following the War of the Austrian Succession. It was Marshal Maurice de Saxe who had the idea of creating an academic college for cadet officers from poor noble families and was joined by the Marquise de Pompadour and banker Joseph Paris Duverney. Architect Ange-Jacques Gabriel was given the task to build the vast complex and completed the job in 1760.

Opposite the Ecole Militaire, still on Place de Fontenoy stands another building of interest: the modern structure of the UNESCO headquarters. The name of the square refers to the Battle of Fontenoy (11 May 1745, near Tournai in Belgium) which was won by Marshal Maurice de Saxe over the Allies.

The walk can be continued by reaching the Eiffel Tower through the Champ-de-Mars. When we reached the Place de Fontenoy, the weather was threatening us with rain so we decided to end it up by walking to the closest metro station!