A climb to the top of the Tour Saint-Jacques, Paris

A climb to the top of the Tour Saint-Jacques, Paris

Only a few people have been able to climb the Tour Saint-Jacques, a single tower that rises in the centre of Paris. Many don’t even notice the monument as their paths lead them straight to popular sites in the vicinity: Notre-Dame, Sainte-Chapelle, the banks of River Seine… and the shopping precinct of rue de Rivoli. .

Bearing witness to the past of the Right Bank, the Tour Saint-Jacques is a Parisian monument that cannot be overlooked. Since its full restoration in the years 2000s, the former bell tower of a church which no longer exists has been open to the public by its owner, the Municipality of Paris. We booked in advance and came to visit the inside and the top of the tower yesterday. Here is a selection of our photos..

From the public garden the Flamboyant Gothic features of the tower are clearly visible, particularly at the top of the tower:

We started our guided tour of the tower at the gate on the west side where the friendly team of agency Des Mots et Des Arts welcomed us. Around 12 people joined the group and the visit started at 10am at the base of the tower for a historic presentation of the tower. By the statue of Blaise Pascal, the tour-guide explained the troubled past of the former church of Saint-Jacques-de-la-Boucherie and the destiny of its bell tower which was saved from demolition during the French Revolution. Now we are ready to the ascent of 300 steps! 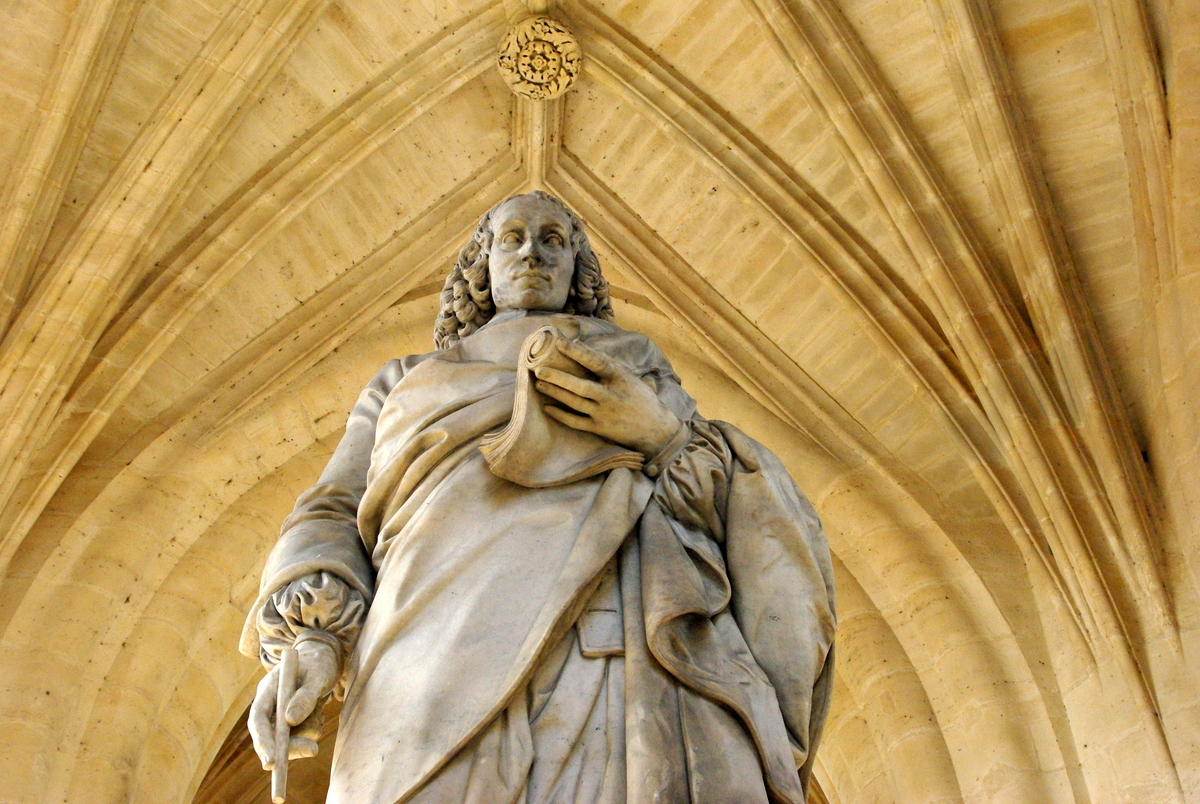 The presentation done, we climbed a short flight of spiral stairs to reach the first floor. Inside were artefacts left by the craftsmen who participated in the recent restoration. The tour-guide went on explaining the phases of restoration from the 19th century to the 2000s.

The 19th century restoration programme took place at a time when Gothic architecture was rediscovered. Under the auspices of writers (Victor Hugo) and with the passion of architects, many Gothic churches and monuments were restored. Viollet-le-Duc is famous for its work on Carcassonne, Pierrefonds and particularly Notre-Dame Cathedral where he added fantastic creatures made of stone: the chimeras. Tour Saint-Jacques was no exception to the rule and many additions were made when restoring the site. An example of this is the beautiful siren (see photo below) added in the 19th century to the tower’s façade, knowing that sirens were not at all fantastic creatures depicted in the Middle-Ages!

A second flight of stairs of approximately 80 steps led us to another fascinating floor where the ceiling is the actual top of the tower. The tower housed a carillon with 12 bells when it was the bell-tower of the church. It was one of the finest in Paris after that of Notre-Dame Cathedral.

The longest climb finally got us to the summit of the tower at 60 metre high where the group discovered one of the most beautiful views of Paris. For our tour-guide, it is the most stunning view due to the central position of the tower: a 360 degree view makes the monuments and landmarks of Paris so close and offers unexpected perspectives.

With a good lens the Eiffel Tower reveals its iron-laces. In the forefront the neo-Gothic basilica of Sainte-Clotilde:

View of the Île de la Cité in the forefront and the Left Bank in the background. Several monuments are visible: the Tribunal de Commerce, the Conciergerie and Sainte-Chapelle, the Saint-Sulpice and Saint-Germain-des-Prés churches, the Montparnasse Tower and the Panthéon being restored:

The long façade of the Conciergerie on the Île de la Cité with the neighbourhood of Saint-Germain-des-Prés behind it. The dark skyscraper of Montparnasse Tower can be seen in the background:

A gargoyle recently restored overlooking the first arrondissement of Paris:

The modern structure of the Pompidou Centre and the Gothic church of Saint-Merri in the forefront:

A stunning view revealing the work of Baron Haussmann in the mid-1850: boulevard de Sébastopol leading to the Gare du Nord. The shady street marks the boundary between the 1st (left) and 4th (right) arrondissements of Paris. To the left, the neighbourhood of Les Halles (with the new canopy and Saint-Eustache church) is overlooked by the hill of Montmartre:

To the left: the perspective of rue de Rivoli leading up to the Place de la Concorde. The CBD of La Défense is visible in the background.

To the right: the district of Les Halles with Saint-Eustache church and the hill of Montmartre.

A closer look at the perspective of rue de Rivoli created by Baron Haussmann in the mid-1850s:

A stunning view of the Historical Axis of Paris (la Voie Triomphale). From the Louvre, the axis runs through the Tuileries Garden, the Place de la Concorde (see the Luxor Obelisk), the Champs-Élysées, the Arc de Triomphe and the Grande-Arche de la Défense (under restoration):

The Musée d’Orsay and the banks of River Seine:

The Pont des Arts without the love-locks! Temporary pinkish deck rails have replaced the locks before the installation of new transparent panels:

Two domes in the same picture: the small dome of the Institut de France and the gilded one of Les Invalides:

In the forefront the dome of the Bourse du Commerce (1st arrondissement) and the massive complex of Opéra Garnier in the background:

The Sacré-Cœur Basilica standing atop the hill of Montmartre:

A closer look at the church of Saint-Eustache, one of Paris’ most beautiful churches although unfinished:

The Romanesque bell tower of Saint-Germain-des-Prés, one of the oldest churches in Paris:

The Île Saint-Louis and its romantic quays:

A closer look at the Gothic features of the Palace of Justice with the towers of the Conciergerie and the Sainte-Chapelle:

The trees of boulevard Saint-Michel, marking the boundary between the 5th (left) and 6th (right) arrondissements:

The Panthéon and its impressively tall crane:

Visit our Flickr album for more high resolution photos of the Tour Saint-Jacques.

To visit the monument, book online at Des Mots et Des Arts. Please note that visits are only organised between June and September.