New posts
You are at:Home»Blog»10 most unusual churches in Paris

Forget the lofty Gothic cathedrals, the majestic Classical churches and other monumental Parisian sanctuaries… and turn your eyes to the little district of Charonne, now included in the 20th arrondissement of Paris. With its preserved charming provincial atmosphere, the village of Charonne has been dominated since the 12th century by the parish church of Saint-Germain-de-Charonne. For a moment, you don’t feel like you’re in Paris and if you keep your eyes from looking upward to the neighbouring ugly high-rise blocks from the 1960s, this curious yet picturesque district with low houses will enchant you.

The Romanesque church and its solid bell tower were built in the 12th century and displays an interesting architecture due to successive additions throughout the years.

The church is flanked by a small countryside cemetery, the only one of its kind in Paris along with the church of Saint-Pierre-de-Montmartre. Here, many famous people rest in peace: the family of André Malraux, the writer Robert Brasillach, shot at the Liberation for his collaboration with the Nazis, and some Federates, the victims of the Versailles repression at the time of the Paris Commune in 1871.

To the average eye, the church of Saint-Étienne-du-Mont next to the Panthéon is seen as a “standard” church edifice. But for the connoisseurs, it is of great interest as it features something unique in Paris – and quite rare in France: a rood screen!

Qu’est-ce que c’est? A rood screen (in French: jubé) is a separation wall between the nave and the chancel, between the space reserved for the common people and the area dedicated to the ecclesiastics. A common feature in the late Middle-Ages, the rood-screen of Saint-Étienne-du-Mont is an open ornate partition of stone tracery.

Following the Council of Trent (1545-1563), most of the rood-screens in France were removed. The ideas of the Counter-reformation was to delete any visual barrier between the laity and the high altar.

The church, built between 1492 and 1626, shows an impressive façade made up of three superimposed Renaissance pediments flanked by the soaring belfry from the 16th century. It stands at odd with the classical architecture of the Panthéon.

Saint-Étienne-du-Mont houses the shrine of Sainte-Geneviève, Paris’ Patron Saint, and the remains of French writers Racine and Pascal.

Despite showing similarities with the ancient ‘Maison Carrée’ in Nîmes, this edifice at the end of Rue Royale is neither a Greek nor a Roman Temple: La Madeleine is a church.

Based on the floor plan of a Greco-Roman temple with construction starting from 1764 it took much time to complete due to the troubled events of the French Revolution and the Napoleonic Era. The sanctuary was finally consecrated as a church in 1845.

And because Paris is all about great perspective and the clever position of various landmarks, it is no mystery that the colonnaded church is echoed across Place de la Concorde and River Seine by its counterpart: the Palais Bourbon, the seat of the French National Assembly.

4. The Soldiers’ Church of Les Invalides

Don’t be fooled by appearances: this little church may be unknown to most tourists visiting Paris, it still stand as one of the most interesting in town! At the centre of the 7th arrondissement on the Left Bank, the famous complex of Les Invalides is easily recognisable with its magnificent golden dome. What is little known is that it within its walls it houses a church truly one of a kind, unlike any other church in the French capital: église Saint-Louis-des-Invalides.

In 1676, Louis XIV commissioned architect Jules Hardouin-Mansart to build a chapel where war veterans could pray. This would become a military church: a sanctuary made for soldiers. The military background of the place is found in the different banners and flags hanging from the walls and the large number of French officers and generals from the 19th and 20th centuries buried in its crypt.

In 1837, the Saint-Louis church was separated by a large glass wall from the dome area (now église du Dôme, where the monumental tomb of Napoleon stands). 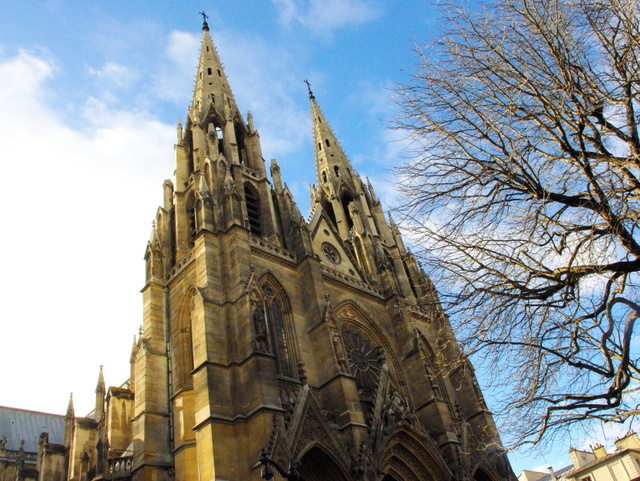 The façade of the basilica © French Moments

Despite first appearances, the lofty Gothic church of Sainte-Clotilde with its soaring twin towers does not date back to the Middle-Ages. On the contrary, this is a relatively new church, built between 1827 and 1857 when a renewed interest in Gothic architecture was fashionable again amongst architects and novelists such as Viollet-le-Duc and Victor Hugo.

The spires rise to a mere 69 metres at the very same height of the bell towers of Notre-Dame.

An interesting fact is that the façade of the church has been replicated to design the Cathedral of the Sacred Heart of Jesus in Guangzhou, South China with financial support from Napoleon III and donations from French Catholics. It took 25 years to build, from 1861 to its inauguration in 1888.

While strolling along one of those large 19th century bouvelards between Les Ternes and Parc Monceau, you may encounter at a bend in the street the Saint-Alexandre-Nevsky Church with an architectural style completely at odds with the surrounding Haussmann blocks.

With its five pyramids and their golden onion-shaped dome reaching a height of 40 metres, it is somewhat a very modest reminder of the famous St. Basil church in Moscow’s Red Square. The Russian Orthodox church was built in 1860 to serve the growing community of Russian immigrants to Paris at the beginning of the 20th century and during the 1917’s Bolshevik Revolution.

It was there that on the 12th July 1918 Pablo Picasso married Russian dancer Olga Khokhlova with Jean Cocteau, Max Jacob and Guillaume Apollinaire as witnesses.

Today, the church is the see of the Patriarchal Exarchate for Orthodox Parishes of Russian Tradition covering all Western Europe.

However, the Russian Cathedral of Paris is not the largest Russian Orthodox cathedral in Western Europe. To admire an even greater Orthodox sanctuary, you would have to go South to Nice and look for the St. Nicholas Church, funded by Russia’s Tsar Nicholas II.

Built by Baltard between 1860 and 1871 in the 8th arrondissement, Saint-Augustin was the first church in Paris designed with a metal frame. This new building method explains why the church does not have the need for external buttressing. The architect designed an eclectic church with Byzantine and Romanesque influences.

Almost 100 metres in length and topped with a dome reaching 60 metres high, the church is ideally situated at the junction of prestigious rectilinear avenues laid out by the Prefect of Paris, Baron Haussmann. However, the architects did not think about one thing: once inside the sanctuary, the traffic noise of the busy large streets Bouvelard Haussmann and Boulevard Malesherbes are easily heard, certainly making it the noisiest church of Paris…

The monumental basilica of Sacré-Cœur stands like a whipped-cream edifice atop the hillock of Montmartre. This white mass of Romanesque-Byzantine architecture with its singular domes shares more resemblance with the Taj Mahal in India than the Notre-Dame cathedral!

The church is so white and glaring on the outside, in contrast to its dark and stuffy interior! Nevertheless, a quick visit inside will be rewarded by spotting one of France’s most important mosaics featured on the apse.

Not many people know that, although a recent construction (1875-1914), the basilica was built by a decree of the newly established Third Republic dating on the 24th July 1873 as a “matter of public utility”. Remember, at that time the French Republic had not separated the Church from the State… this will occur in 1905.

Architect Paul Abadie was given the great task to design the edifice – people could trust him for he was the one who heavily restored the famous cathedral St. Front of Périgueux … in Romanesque-Byzantine style too!

Today, mobs of tourists climb the hill on foot or via the funicular to the basilica to admire the stunning view over the roofs of Paris. We prefer avoiding the masses and instead climb to the top of the central dome to embrace the stunning panoramic view, the second highest in Paris after the third floor of the Eiffel Tower.

Read more about the Sacré-Cœur basilica.

Let’s go 25 km south-east from Notre-Dame and reach the New Town of Évry. There stands the only purpose-built cathedral in France of the 20th century! At first quite disconcerting, the sanctuary does not borrow any “traditional” architectural styles commonly employed to French churches… Neither Romanesque, nor Gothic or Renaissance, Évry Cathedral demonstrates how the Catholic church is at ease adapting to the 21st century.

The cathedral has the shape of a truncated cylinder whose walls are covered with 800,000 bricks. The top of the church is crowned with 28 silver linden trees that are planted on the roof of the cathedral rising to 34 metres.

A sign of the times is that once inside, don’t expect to see naves, transepts and medieval stained-glass windows: the cathedral is designed as a theatre and large roof windows provide direct sunlight.

The construction of Évry Cathedral started in 1992 and was dedicated on Easter Day 1996. On the 22nd August 1997, it welcomed Pope John-Paul II. 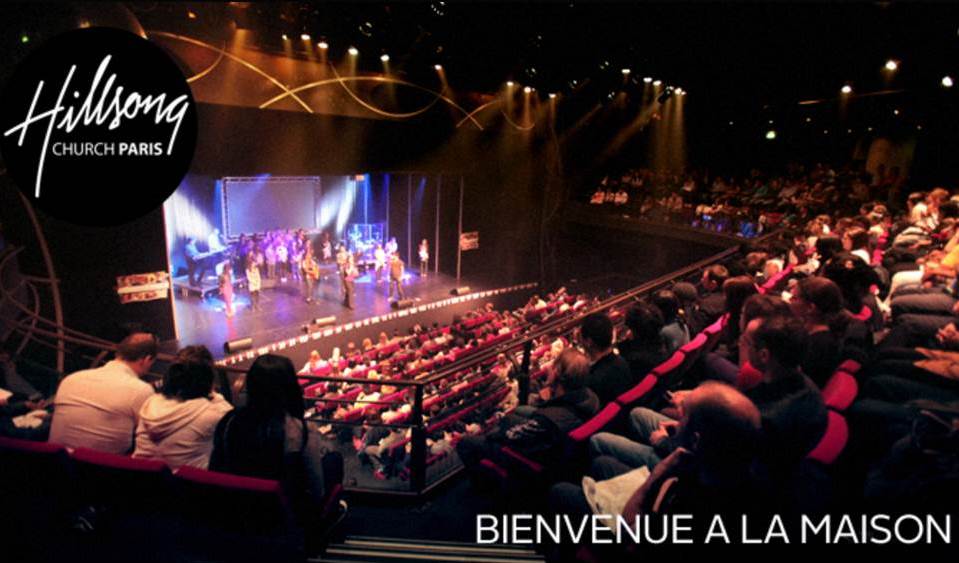 Until now we have been mentioning building-based churches without questioning the fact that a church can also be more than that: a congregation of people. In the 2000s, a new style of church has been developed in Paris, which some may call “contemporary”. Meeting each Sunday in a secular theatre (at the time of writing at the Bobino in Montparnasse), the vibrant bilingual Hillsong Church in Paris is a fast-growing community reaching an attendance of over 2,000 people, making it one of the largest protestant congregations in France. The mother church, based in Sydney, Australia, started in 1983 with just 45 people. It now has a total attendance of over 30,000 on any given weekend in Australia and has growing congregations worldwide: Amsterdam, Barcelona, Cape Town, Copenhagen, Dusseldorf, London, Kiev, Konstanz, Lyon, Moscow, New York, and Stockholm.

Hillsong is famous for its live praise and worship albums, many of which have achieved gold status in various countries, and the songs are sung in churches around the world, including “Shout to the Lord”. Experiencing the loud and pop-rock service at Hillsong Paris certainly demonstrates that the church rightly belongs to our category of the top 10 “unusual churches” in Paris! 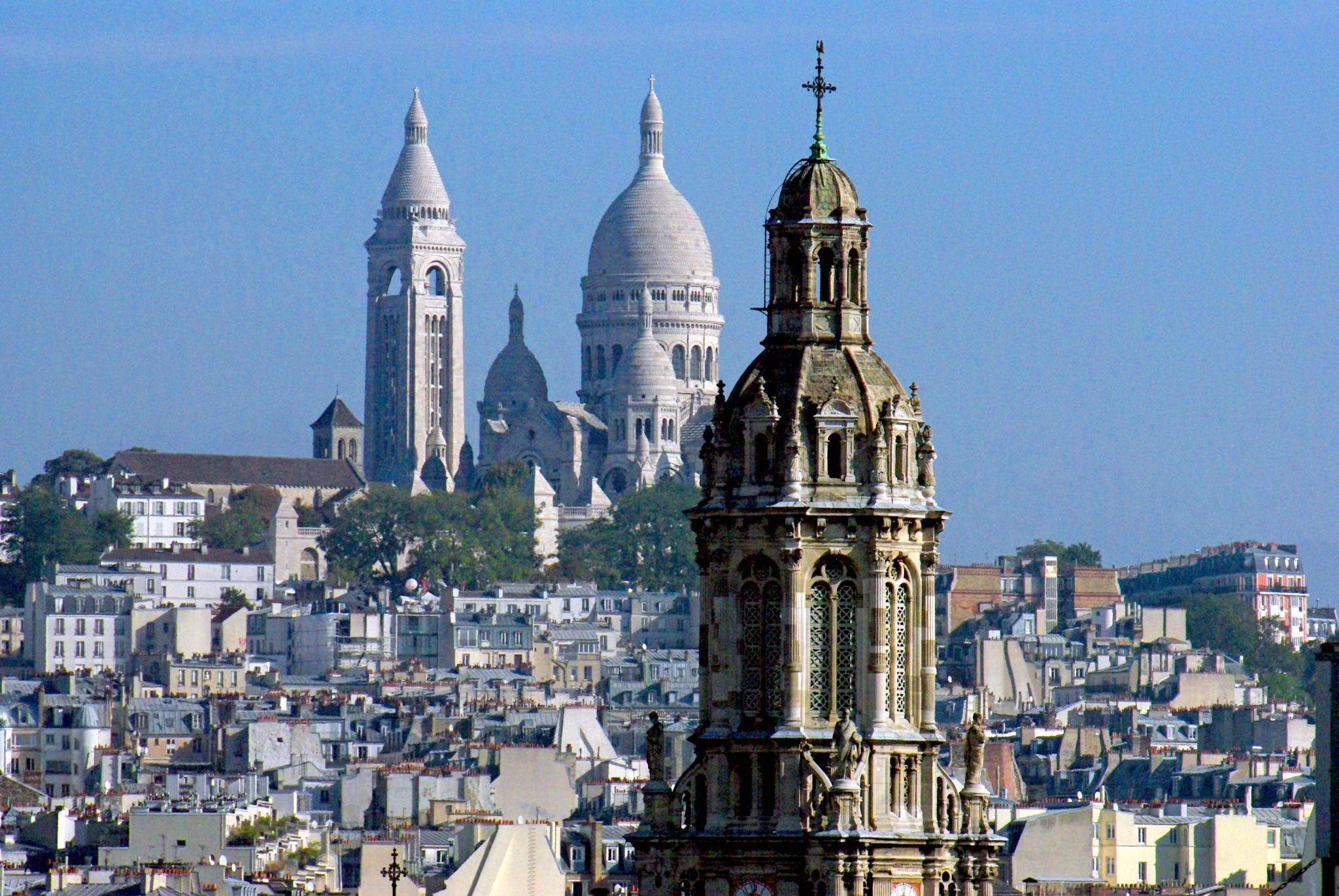