In 1781, New York was still a British settlement and Sydney, Australia, did not yet exist. These two great cities, known for their skyscrapers, were preceded by a few European cities, particularly Paris. Yes, the tallest skyscraper of Paris dates back to the 18th century! Let’s learn where to find it…

Head to the first arrondissement, the central district of Paris. In the vicinity of the Louvre and Palais-Royal, you may think I’ve gone crazy to suggest there is a hidden skyscraper.

You will find it at 48 rue de Valois.

The best view to enjoy is from the start of Rue Vivienne as you exit from the Gardens of the Palais Royal.

The history of 48 rue de Valois

Entrepreneur François Guiraud de Talairac built it in 1781, under the reign of Louis XVI (1754-1793), on the site of the palace of the Radziwill, Polish princes.

In fact, the building is quite impressive, even today. It has a total of nine levels under the eaves. It was at the time (and for many years to come) the tallest building in Paris… and should we say the tallest skyscraper of Paris!

According to my estimates, the tower would be 30 meters high. 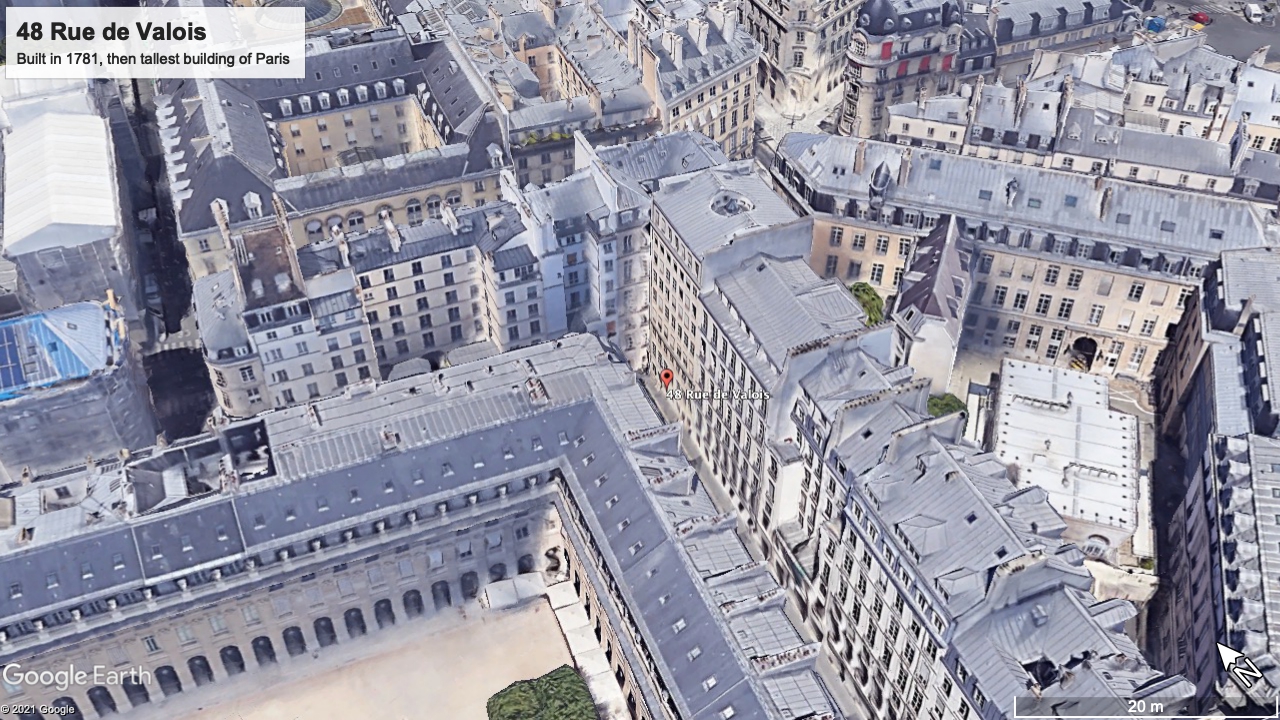 This height had both a speculative and advertising purpose because it was to attract visitors’ attention to the Palais-Royal.

In addition, Guiraud de Talairac was keen to pack as much rental accommodation as possible into a minimum of floor space.

The building had two doors opening into a public passage: one in rue de Valois and the other in the dead-end street of Rue Radziwill (owned by the Banque de France).

The passage (one of the first created in Paris) had elegant shops at the time when the Palais-Royal was a popular place to be.

What was inside the building?

The regularly dressed stone facade (pierre de taille) is quite sober as it has no moulding.

Inside, the building housed apartments and a hotel on the upper floors.

On the ground floor and on the mezzanine was a clandestine gambling den with 19 rooms, hidden under a respectable business.

Then, the Banque de France bought the building at the end of the 19th century to house its staff and then offices.

Inside is a fabulous double staircase, based on the one found in Chambord.

It is lit by a circular glass roof on roof.

The double staircase (escalier à double révolution) was designed so that two people could take it simultaneously without crossing each other.

Both tenants and clients of the little Hôtel Radziwill appreciated these two peculiarities, conducive to careful dodging.

Today the Banque de France owns the building, so you won’t get access to admire it.

Imagine how the staircase can be a puzzle for the bank’s employees: they must carefully calculate which stairway entrance to take depending on the floor (even or odd) they want to go.

You may ask: What about today’s tallest skyscraper in Paris?

The tallest skyscraper of Paris is Tour Montparnasse (210 m) which should be the subject of a restoration campaign.

In 2022, the Tour First (231 m) ranks as France’s tallest skyscraper. You can see it rising above the esplanade of the business district of La Défense.