Be stunned by the beauty of the Sainte-Chapelle, Paris

Be stunned by the beauty of the Sainte-Chapelle, Paris

With its stunning stained glass, the Sainte-Chapelle is a gem of Gothic architecture in the heart of Paris. Welcoming over 900,000 visitors each year, the medieval chapel is one of Paris’ most magical sights. Its magnificent stained-glass windows are among the oldest in Paris.

The Sainte-Chapelle: a bit of history

The Sainte-Chapelle (Holy Chapel) was commissioned by King Louis IX (Saint-Louis) possibly from architect Pierre of Montreuil between 1242 and 1248 in the Palais de la Cité, then the royal residence. Consecrated in 1248, the sacred shrine was designed to house the relics of the Passion of Christ. In 1239, the devout king acquired from the Emperor of Constantinople the Crown of Thorns and in 1241 a fragment of the Holy Cross and the Holy Lance. Saint-Louis paid nearly three times the cost of building the Sainte-Chapelle.

The Passion relics were kept in a large and ornate silver chest called the Grand-Chasse.

In storing such relics in a magnificent sanctuary, Saint-Louis sought to give Paris and the kingdom of France a definite prestige in the eyes of medieval Europe. The king’s ambition was to make Paris the second capital of Christendom after Rome, a “New Jerusalem”.

During the French Revolution, the Sainte-Chapelle was sacked by the Revolutionaries who saw in the shrine a symbol of royalty by divine right. The reliquary shrine was melted, the steeple and baldachin removed, and the relics dispersed. However a few were saved and are now stored in the treasure of Notre-Dame Cathedral. As for its remarkable stained-glass windows, they were left untouched.

In 1797, the place became an archival depository and a few stained-glass windows were removed to facilitate working light.

A period of restoration took place between 1841 and 1867 under the direction of Duban and Lassus. Air pollution, the 1999 storm and the presence of large numbers of visitors have caused damage to the edifice and its stained-glass windows. The last restoration has been taking place since the late 1970s and should be completed in 2015.

> Get your Tickets for the Sainte-Chapelle [Priority Entrance!] <<

Exterior of the Sainte-Chapelle

The Sainte-Chapelle was built some 80 years after Notre-Dame Cathedral.

The exterior of the chapel is uncomplicated and quite sober. The Rayonnant Gothic chapel features tall windows (15 m) subdivided by bar tracery and deep buttresses. The latter are surmounted by pinnacles decorated with crockets and crowns of thorns, referring to the first relic brought in the chapel by Louis IX.

The entrance to the chapel is located under a porch whose tympanum represents the coronation. The trumeau features a Virgin with Child.

Above it is a much more ornate porch with a tympanum representing the Last Judgement.

The present spire was raised in 1853 and reaches a height of 75 metres above street level.

Interior of the Sainte-Chapelle

The Sainte-Chapelle is considered among the greatest Gothic masterpieces of Christendom with the richest decoration found inside. The shrine is famous for housing an exceptional collection of 13th-century stained glass.

The Sainte-Chapelle consists of two superimposed sanctuaries: the Lower Chapel and the Upper Chapel.

This was the place of worship for the palace staff and the King’s household.

The nave has four bays and underlined ribs with red stripes. The vaults are decorated with golden fleur-de-lys, the royal symbol.

The monumental Upper Chapel was used by the King, his close friends and family who accessed it from an outdoor terrace that has since disappeared. Entering this stunning glasshouse creates a sense of awe and wonder.

Like the Lower Chapel, the nave has four bays with walls much taller. In addition, there is a seven section choir.

The stained glasses are the oldest in Paris, most of them dating back to the 13th century. Of the 1113 scenes depicted in 15 windows covering a glazed area of 618 m2, 720 are originals. 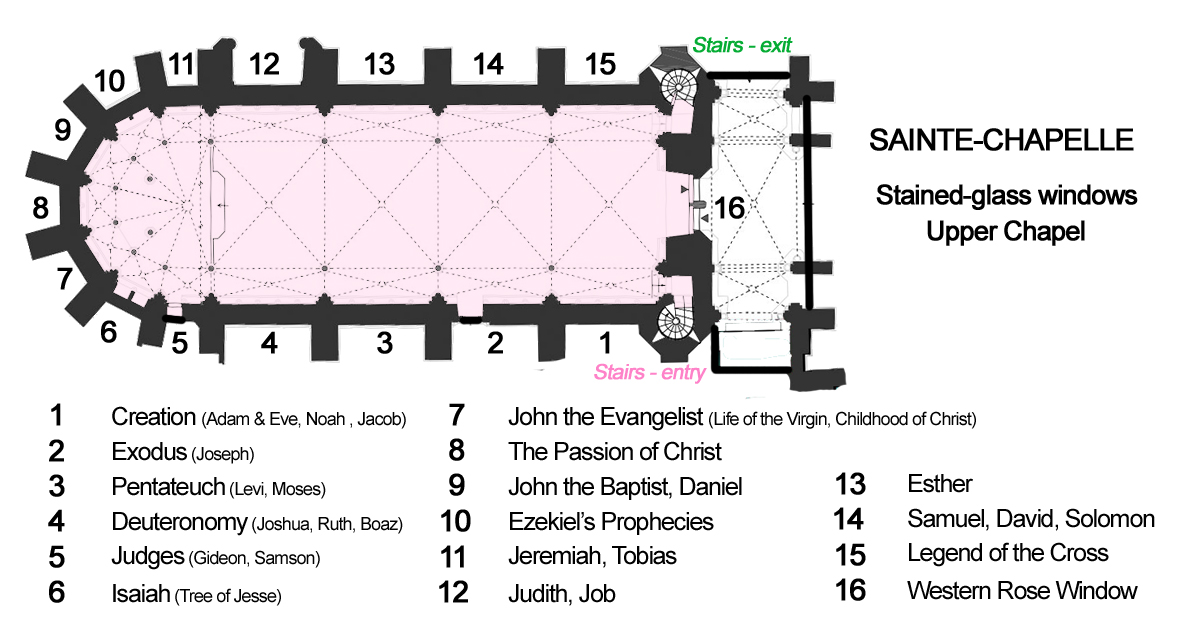 The stained-glass windows tell the story of the Bible, from Genesis to the Resurrection of Jesus Christ. The best master-craftsmen who had recently worked on Chartres cathedral were commissioned by the king to work on the Sainte-Chapelle’s stained glass. The thinness of the pillars separating the windows is strengthened with tie beams.

The western rose window in Flamboyant Gothic style was added to the chapel in the late 15th century. It illustrates the Book of Revelation of St. John with Christ returning in glory in its centre.

The nave is encircled by the statues of the 12 Apostles – the “Pillars of the Church” – set on the ribbed vault’s springing line. Six of them are originals, the others are kept in the Cluny Museum.

In the choir, the empty shrine once contained the 22 relics of the Passion of Christ.

Supported by slender pillars, the vaulted ceiling seems to float above the towering stained-glass windows.

Unlike the Lower Chapel, the vaults are not portrayed with fleur-de-lys (the royal symbol) but with golden stars, symbolising the Heavens.

Today visitors enter the Upper Chapel via a spiral staircase from the Lower Chapel.

Over 500 pages it focuses on the development of Gothic architecture with many illustrations and photographs, but not only. I’ve also found interesting the in-depth discussion of the most diverse art forms, including painting, sculpture, metalwork and even book illumination! It also includes specific coverage of the Cathars’ Heresy and the Papal Palace in Avignon. And, of course, it mentions the Sainte-Chapelle!

>> Get your Tickets for the Sainte-Chapelle AND Conciergerie [Priority Entrance!] <<