Situated in the 18th arrondissement, the majestic Sacré-Cœur basilica is one of Paris’ most visited monuments.

The sanctuary stands like a whipped cream edifice atop the hillock of Montmartre, sharing more resemblance with the Hagia Sophia in Istanbul than the nearby Notre-Dame cathedral.

Let’s have a closer look at this surprising landmark of Paris.

Sacré-Cœur Basilica: A bit of history

The top of the hill of Montmartre where the church now stands has been a sacred site in Ancient Times. Legend has it that druids worshipped up there. Then, the Romans built temples dedicated to gods Mars and Mercury.

The legend of St. Denis

Around 270 AD, the Christian community built a chapel on the site in honour of Paris’ first bishop, St. Denis.

According to the legend the Romans beheaded the Patron Saint on the top of the hill.

After his execution, the body of Denis would have picked its head up and started to walk while the mouth was delivering a complete sermon. The body stopped its stroll somehow. On the site where he fell completely dead, Christians raised a small shrine: the present-day St Denys-la-Chapelle. The name was eventually anglicised as Sydney.

The project to build a monumental basilica atop the hill of Montmartre was triggered by a group of influential people who had two good reasons to do so.

Why was the Sacré-Cœur basilica built?

Firstly, a pledge was made to build a church if Paris escaped untouched from the war with the Prussian army in 1870-1871.

Secondly, the defeat of the French army in 1871 was interpreted as a moral condemnation of the sins of Paris.

Authorised by the National Assembly in 1873, the project included the building of an imposing Christian church visible from all over Paris. In a way, the sanctuary commemorates the 58,000 who lost their lives in the Franco-Prussian war.

Interestingly, this was in sharp contrast with the Gothic style of other famous Parisian churches (Notre-Dame, Sainte-Chapelle, Saint-Eustache…).

Abadie was an architect also known for restoring the cathedral of Périgueux whose design looks similar to that of the basilica in Montmartre. The architect won the competition after beating 77 other projects.

Construction of the basilica

Construction of the church started on the 16th June 1875 with the layout of the first stone.

When Paul Abadie died in 1894, Lucien Magne continued the project until 1914, just before the outbreak of the First World War.

The inauguration of the central dome and the surrounding cupolas took place in 1899.

Then, in 1912 Lucien Magne added an 83-metre tall campanile to house the world’s largest clock of the time: ‘La Savoyarde’. The bell was a creation of the Paccard bell-foundry in Annecy.

Why the name ‘Sacré-Cœur’?

The sanctuary was given the name ‘Sacré-Cœur’ meaning Sacred-Heart in English. This is a reference to the heart of Jesus, which is the representation of his divine love for humanity.

However, the consecration of the church, initially planned for the 17th October 1914, was delayed to the 16th October 1919 due to the war.

The official completion of the project took place in 1923 with the inauguration of the decorative mosaic of the choir.

The exterior of the Sacré-Cœur basilica

In fact, the whipped cream look of the edifice is mainly due to its stone: the ‘Château-Landon’ stone which comes from the Souppes-sur-Loing quarries (département of Seine-et-Marne).

Therefore, in wet weather, the calcite contained in the stone acts like a bleacher. It gives the church a definite chalky white appearance. In addition, the whole church is covered with robust scale paving.

The dimensions of the basilica are:

The church stands on top of the hill of Montmartre at an altitude of 130 metres above sea level.

The central dome is 83 metres tall and is supported by 80 columns each topped with a different capital. In addition, the ovoid dome is surmounted by a lantern with a colonnade.

Also, the circular gallery inside of the dome is accessible to the public.

One must climb a spiral staircase made up of 237 steps to enjoy a breathtaking view of Paris.

The panoramic view extends to La Défense, the Eiffel Tower, the Montparnasse Tower, the Panthéon, the Bois de Vincennes, the Buttes-Chaumont and the city of Saint-Denis.

In fact, nearly all the monuments of Paris can be seen with binoculars. On a clear day, one can see as far as 30 km.

The bell tower or campanile (completion in 1912), is surmounted by a cross reaching an altitude of 91 metres above sea level.

Interestingly, this makes the Sacré-Cœur the second-highest point in Paris (213 m) after the Eiffel Tower (324 m) and just before the Montparnasse Tower (210 m).

The campanile houses the largest bell of France.

Cast by the Paccard bell-foundry in Annecy in 1895, it was a present from the four dioceses of Savoy.

In fact, it bears the nickname ‘La Savoyarde’ because of its origins. However, its real name is “Françoise Marguerite”.

The equestrian statues in bronze

Above the narthex stand two equestrian statues in bronze by sculptor Hippolyte Lefebvre:

Then, above the narthex and the two equestrian statues stands a representation of Christ. It is the basilica’s most important statue set inside a niche. The giant 5 m tall Jesus shows his heart to the whole city of Paris.

Inside the Sacré-Cœur basilica 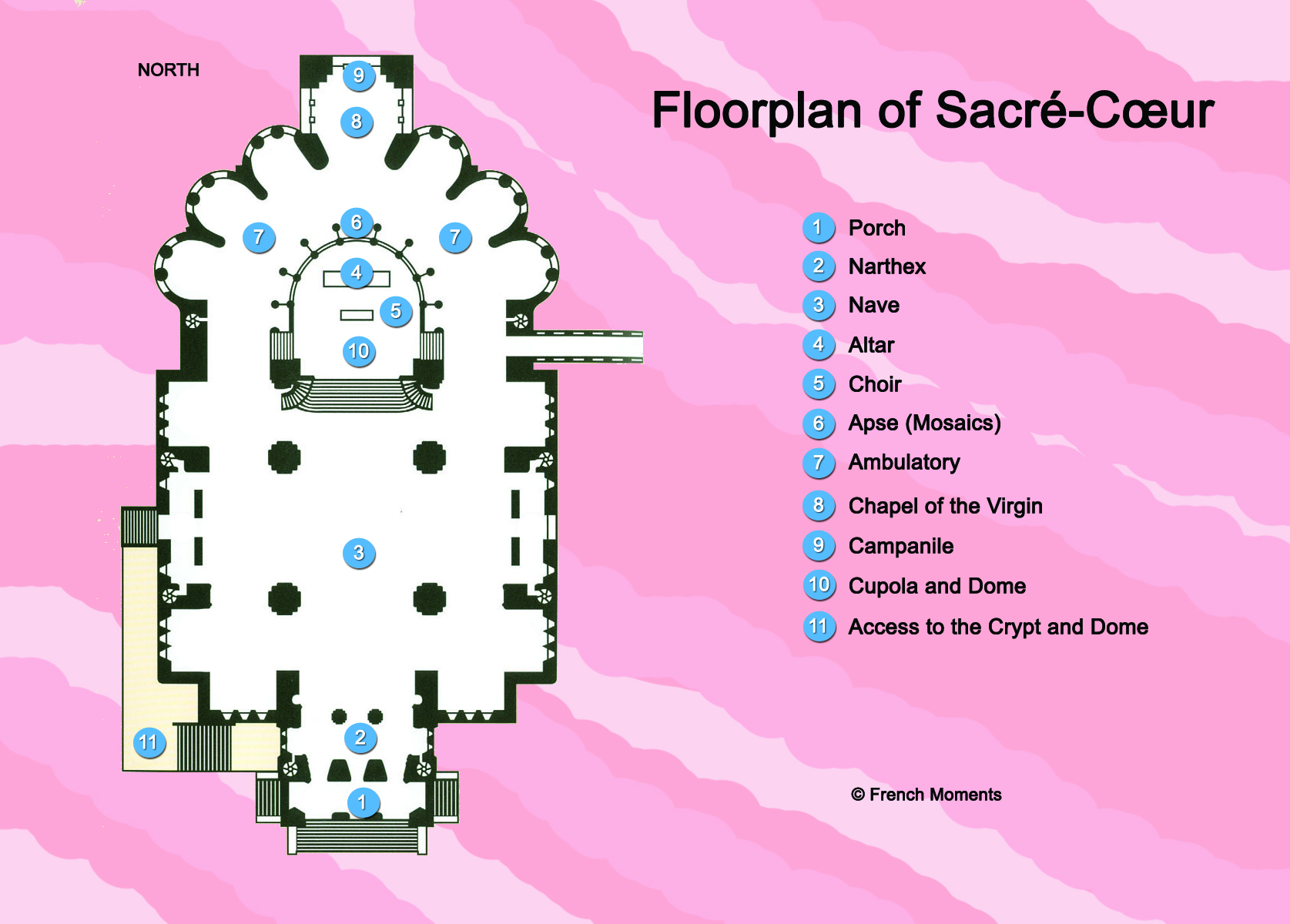 Attracting more than 11.5 million visitors (tourists and pilgrims alike) each year, the Sacré-Cœur basilica is France’s second most visited church after Notre-Dame Cathedral.

The access into the sanctuary is through grand bronze doors with foliage designs and relief sculptures illustrating scenes from the life of Christ, such as the Last Supper.

The Sacré-Cœur is designed with a floor plan in the shape of a Greek cross decorated in Romanesque-Byzantine style.

Seven chapels surround the nave and the choir features a vast cupola rising up to 55 metres and of a diameter of 16 metres.

The ceiling of the apse is ornate with France’s largest mosaics, measuring about 480m2. Designed by Luc-Olivier Merson in 1922, it represents Christ in Majesty with a Latin inscription: to the sacred heart of Jesus from a fervent, penitent and thankful France.

The bronze altar is based on the one at Cluny Abbey (Burgundy).

Finally, the vast crypt and its vaults feature statues of Patron saints and a relic believed to be the Sacred Heart of Jesus Christ.

Access inside the church is free but there is a charge for entry to the crypt and the ascent to the dome.

Where to find the Sacré-Cœur basilica?

Click on this link to open google map or use the map below: 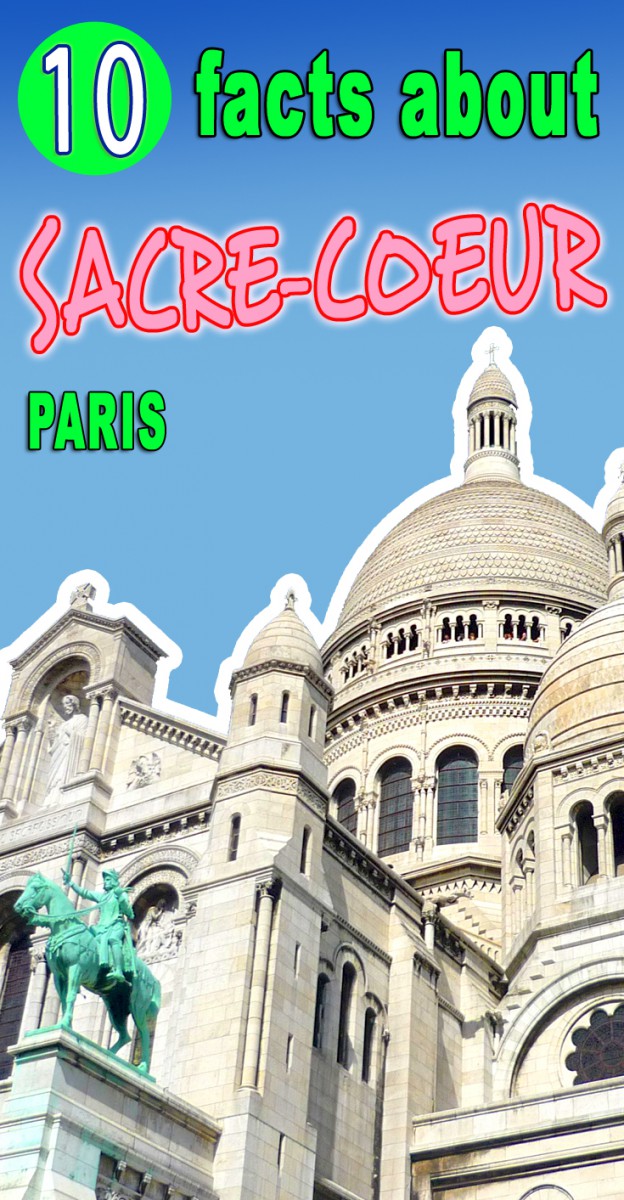 More photos of the church

Here is a little selection of Sacré-Cœur photos I took during my visits to Montmartre. Enjoy!

Montmartre in the spring:

A view of Montmartre from Montparnasse Tower: