The picturesque Place des Vosges is located in the Marais district in Paris, at the junction of the 3rd and 4th arrondissements. This excellent example of Louis XIII-style architecture is the oldest planned square in Paris and its charm comes from the regularity of the façades.

Place des Vosges, one of the most beautiful Parisian squares 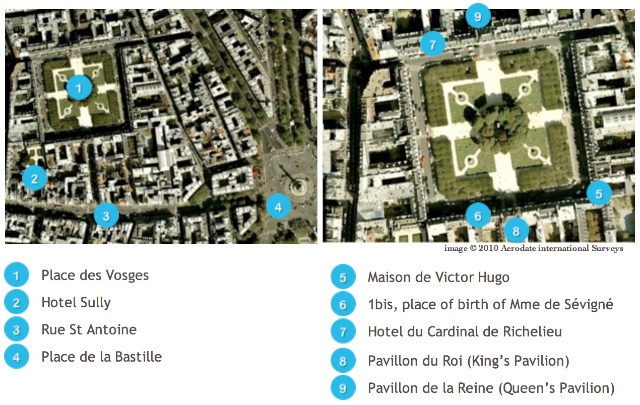 There are only two exceptions to the regular geometry of the square:

Both buildings stand one storey higher than the rest of the square’s pavilions. Unlike what they might suggest, they never housed neither the King nor the Queen.

The King’s concierge used to live in the King’s pavilion, which is built on top of a gateway, linking the square to the nearby Rue Saint Antoine.

The trees of the square

At the centre of the square, encircling the statue of Louis XIII, is a grove of mature lime and chestnut trees.

From them converge gravel paths, separated by four sets of flowerbeds with beautiful trickling fountains.

Following the outline of the square are three rows of clipped lime trees planted inside a painted fence on the four sides of the square.

The jewel of the Marais district, the Place des Vosges has remained intact since its construction, isolated like a peaceful sanctuary, away from the busyness of the French capital.

The Place des Vosges: a bit of history

Before the square was built in the early 17th century the famous “Hôtel de Tournelles” stood on this site. The mansion (which dated back to 1388) was occupied by the royal family and served as one of its residences.

It was there that King Henri II died in agonising pain, after being accidentally wounded during a tournament. Sharing a disdain for the Tournelles, Queen Catherine de Medici did all she could to have the building pulled down, and moved the royal family to the Louvre.

The construction of the square

Her son-in-law, King Henri IV, commissioned the construction of the square in 1605 to the architect Louis Métezeau, along with the Place Dauphine on the Île de la Cité. Henri IV was assassinated by a fanatic in 1610 and did not see the realisation of his design. His 11-year-old son, the new King Louis XIII, attended the inauguration of the new Place Royale in 1612.

The central lawn of the square was ideal for the practice of duels, tournaments and parades.

In 1619, Cardinal Richelieu erected a bronze statue of King Louis XIII in the centre of the square. The statue was melted down during the French Revolution and eventually replaced with a new copy in 1825.

During the Revolution and change of name

The royal square did not keep its name during the French Revolution when it was renamed Place de l’Indivisibilité. The square was given its current name in 1800 by Napoleon, in gratitude to the Département of the Vosges, which was the first in France to pay the taxes imposed to support the campaigns of the Revolutionary army.

Even though the Kings and Queens of France never lived in the pavilions of the Place des Vosges, the peaceful square was still a favourite dwelling place for the French aristocracy. Many famous French people lived there: Cardinal de Richelieu (number 21), Madame de Sévigné (born at number 1bis) and Victor Hugo.

The Victor Hugo House, located at the “Hôtel de Rohan-Guéménée” (number 6) in Place des Vosges, is a museum dedicated to the French artist and writer. The author of “Les Misérables” lived on the second floor from 1832 to 1848, one year after the publication of “Notre-Dame de Paris” (the Hunchback of Notre-Dame) and before his exile to Guernsey. The municipal museum displays a collection of Victor Hugo’s personal drawings, books, portraits and furniture.

A doorway on the South-West corner of the Place des Vosges leads to the gardens of the Hôtel de Sully. A formal garden and the Orangerie border the beautiful Renaissance mansion. Maximilien de Béthune, Duke of Sully, former Superintendent of Finances to King Henri IV, purchased it on 23 February 1634 at the grand age of 75 and the estate remained in the Sully family until the 18th century.

Admission to the gardens is free.

For more information about the Hôtel de Sully, visit the official website.

The Place Ducale in Charleville-Mézières

In Charleville-Mézières (Ardennes) lies another beautiful square, the Place Ducale, often referred to as the sister square of the Parisian Place des Vosges.

The Place Ducale certainly shares the same characteristics: a perfectly symmetrical design and a common style of architecture. It seems that the similarities between the two squares are a result of their respective designers being brothers: Louis Métezeau in Paris and Clément Métezeau in Charleville-Mézières.

A little smaller than the Place des Vosges, the Place Ducale is 127 metres long and 90 metres wide. Twenty-seven pavilions in the Louis XIII-style border the square following a quaternary model: four bays, four picture windows on each storey, four dormer windows and four oculi on the roof.

Except for their dimensions, the major difference between the Place des Vosges and the Place Ducale is the absence of grass and trees in the centre of the latter (the square is covered with cobblestones).

This square was built in 1606 by Clément Métezeau by order of Charles de Gonzague, Duke of Nevers and nephew of King Henri IV.

Since 1999, the Place Ducale in Charleville-Mézières has held a predominately pedestrian function.

Visit the Tourist Board of Charleville-Mézières-Sedan for more info.