Peille, a hilltop village in the Nice Hinterland

Peille, a hilltop village in the Nice Hinterland

Peille is a perched village set atop a narrow rocky spur overlooking the Peillon Valley in the Prealps of Nice.

Plan your trip to Peille and the region of Nice!

Peille is situated on the D53 road which winds up and down in the Hinterland of Nice between Nice and Menton. The village lies at an altitude of 630 m above sea level. 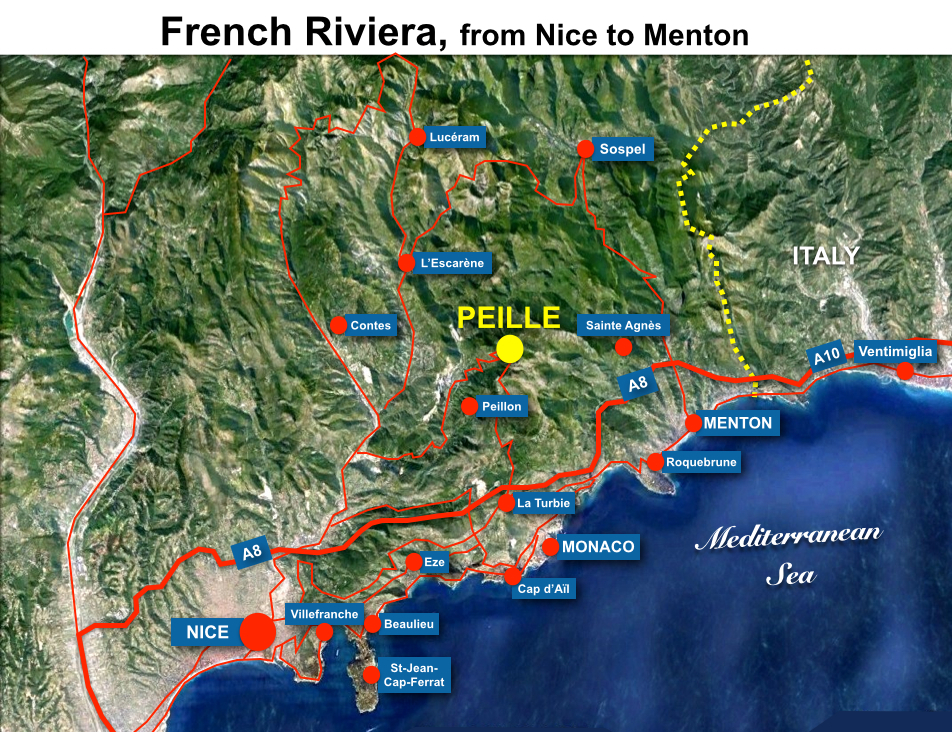 Peille is a superb medieval village clinging to the mountainside, surrounded by the peaks of Mont Agel, Pic de Baudon and the Cime de Rastel.

Peille: a bit of History

One of the first written mentions of the village dates back to 1029 under the name “Gaucelinus de Pilia“.

The name of the village probably comes from the Latin “pel“, one of the many terms for a rocky place in a dominant position.

In the 12th century, Peille administrated a territory that was quite large and included Peillon and notably Monaco. However, the famous Rock was lost to Genoa in 1191.

From 1388 to the French Revolution, Peille and the County of Nice belonged to the House of Savoy.

After the referendum of 1860, the whole region of Nice joined France.

Once you have passed the old village gate at the foot of the rock, you discover the heart of Peille.

Peille preserved from its distant and glorious past the remains of fortifications and an old court of the 14th century (the palace of the Consuls).

Peille has kept part of its medieval fortifications and the remnants of an old castle situated a little distance above the village.

Place Carnot and the Town-Hall

The little square of Place Carnot leads to the curious town hall of Peille.

In one corner of the square, you can see the town hall which occupies the chevet of a church!

Indeed, the Romanesque chapel of Saint-Sébastien is one of the most beautiful religious buildings in the village. The oldest parts of the sanctuary date back to the 12th century.

In the 19th century, the chevet of the church became the headquarters of the Town Hall. Its domed roof is an unmistakable eye-catcher when looking at the village from afar.

The ensemble formed by the Place André Laugier and the Place du Mont Agel is, without doubt, the most attractive site in Peille.

Dating from the 12th century, the pretty squares have pebbled pavement.

There are two remarkable residences:

A commemorative plaque hanging on the façade of the Palais des Consuls reveals that in the Middle Ages, Peille’s jurisdiction extended over a vast territory that included the present-day Principality of Monaco:

Seat of the Consulate of the Counts of Provence
On 2 January 1177 in Aix(-en-Provence), Alfonso II, King of Aragon, Count of Barcelona and Marquis of Provence, established, approved and confirmed the Consulate of Peille.
Its jurisdiction extended to Peille, Peillon, La Turbie and Monaco.
On 19 May 1179, the consuls of Peille ceded to the City of Genoa the rights that Peille had over the Rock of Monaco.

On the place du Mont Agel, there is a column flanked by an old gothic fountain dating from the 14th century and a wash house.

Then Rue Lascaris leads to the Palais Lascaris.

On the very edge of the cliff stands the “Palais Lascaris” built by the Lascari family in the 14th century and renovated in the 17th century.

Coming from the village, it is easily recognisable due to its orangey façade.

Walk to the left of the Palais Lascaris and climb to the top of the Baous, the rock that dominates the cliff and the Faquin gorge. This is where stands the War Memorial.

From the belvedere, you can enjoy a stunning view of the maritime pine and oak forests.

You can also see the main access road to Peille, which comes from La Turbie. A passage had to be traced, with the help of mines, in the rocky limestone bars of the western slope of the ridge.

In addition, you can also spot the remains of the ramparts and the ruins of the feudal castle that dominate the village to the north.

Outside the village, in the hollow of the Faquin valley descending from the Col de la Madone de Gorbio, is the parish church of Sainte-Marie.

It is the main religious building in Peille. The Romanesque sanctuary dates from the 12th century and is one of the oldest in the region. Its pyramidal stone bell tower is an unmistakable eye-catcher.

The church was made up of two adjacent chapels. The interior is ornate with ancient frescoes. The Sainte-Marie Church was the possession of the canons of Saint-Ruf in Avignon.