The charming little town of Obernai, Alsace is located at the foot of Mount St. Odile and is the second most visited town in the département of Bas-Rhin after Strasbourg. The medieval streets of its old town are bordered with magnificent half-timbered houses which are overlooked by the twin towers of the St Pierre and Paul church and the belfry.

The old town of Obernai

The prosperous past of Obernai is linked to the Décapole, an alliance of 10 free Alsatian cities, recognised in 1354 by Emperor Charles IV: Obernai, Kaysersberg, Haguenau, Colmar, Wissembourg, Turckheim, Rosheim, Munster, Sélestat, Mulhouse (replaced by Landau from 1515) and Seltz (from 1358 to 1414). The Decapole was defined by a military alliance and, something particularly rare at the time, a financial aid in case of bankruptcy. After Alsace was joined to France, Louis XIV ordered its dissolution in 1674.

The old town of Obernai includes some beautiful examples of restored medieval and Renaissance houses, many of them half-timbered which are found in the streets around Place du Marché, ruelle des Juifs, Place de l’Etoile and rue des Pélerins. Obernai’s most famous monuments are the Renaissance well of the six buckets (1579), the Kappelturm Belfry (60 metres high), the Town Hall (from 1370) the Corn Exchange Market (Halle aux Blés), dating back to 1554, and the remains of the medieval ramparts. 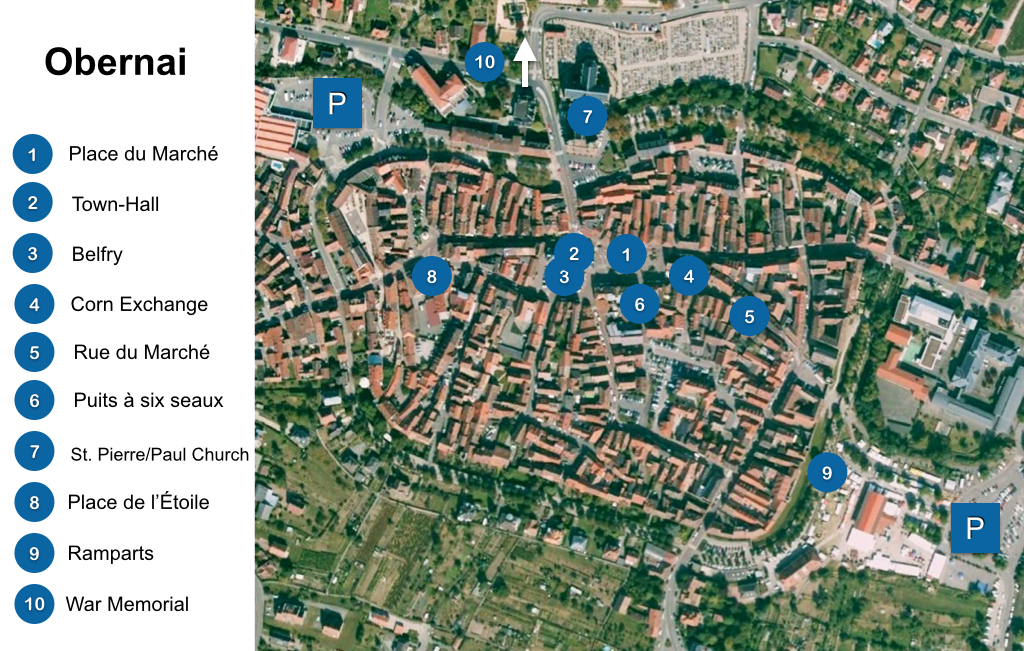 The main square of Obernai is situated at the centre of the medieval town and is bordered by beautiful half-timbered houses, the town-hall, the belfry and the corn-exchange hall. There has been a open-air market on Thursday morning since 1301.

At the centre of the Market Place stands the statue of St. Odile, Alsace’s Patron Saint. The monument was sculpted in 1904 to mark the completed works for the supply of drinking water in Obernai.

Dating from 1554, this fine Renaissance hall with a gable elevation facing the square incorporates a few Gothic elements. Known today as the “Halle au blé” and housing a restaurant, it was once the public butchery.

The Chapel Tower (Kapellturm) was built around 1285 as the bell tower of the Virgin’s Chapel. When the chapel was destroyed in 1873, the tower was kept and has become the emblematic monument of Obernai. It served simultaneously as a bell tower, a watch tower and the town’s belfry. With its 60 metre tall Gothic spire, the tower is one of Alsace’s tallest bell tower. Since 1596, it has been flanked by a gallery with four watchtowers.

Next to the Chapel Tower on the Market Place stands the Town Hall of Obernai. Built on the foundations of the former Court of the Burghers (1370), it was remodelled and extended in 1848 in Neo-Renaissance style. The façade giving onto square features an oriel window and a fine sculpted balcony from 1604. The vivid colours and patterns of the façade were restored to their original states in 1992-1993.

Built in 1579 in Renaissance style by a team of craftsmen from Strasbourg, the gracious well is one of the finest in Alsace. The octogonal canopy and its copper roof topped by a weather vane contains sculptures depicting scenes from the Old Testament. It is supported by three columns with Corinthian capitals.

Locally known as the ‘Sechseimerbrunnen’, the well was originally painted.

At noon on the 2nd November 1970, the well’s structure completely collapsed when the brakes of a truck failed. Fortunately, it was quickly decided to restore the well and within two years the monument was standing again!

The pedestrian street linking Place du Marché to the synagogue and the ramparts is lined on both sides by beautiful half-timbered houses. There can be found a few restaurants with terraces, souvenir stores and other local shops.

The ‘Star Square’ takes its name from an inn at number 7. To the East of the square is a beautiful townhouse. Its colourful glazed-tile roof is not characteristic of Alsace and dates from the beginning of the 20th century.

The massive Catholic church was built in pink sandstone of the Vosges between 1865 and 1970 by Eugène Petiti and inaugurated in 1872. The church replaces a former Gothic sanctuary from the 15th century itself built on the remains of a Romanesque sanctuary with a crypt (cc. 1160-1170). Local people argue that this is Alsace’s largest church after Strasbourg Cathedral.

The façade features three portals surmounted by a rose-window and topped by two identical soaring spires.

Inside, some of the stained-glass windows from the 15th century come from the former demolished church. The symphonic organ was manufactured by Joseph Merklin (1882).

During the Middle Ages, the inner wall that surrounded the old town of Obernai was 1,400 metre long and featured around 20 towers and 4 gates. The central platform has been transformed into a popular and peaceful strolling place. The best view of the fortification can be observed coming from the free ‘Parking des Remparts’.

For a panoramic view over the old town of Obernai, the Vosges and the Alsace plain, climb Rue de la Paix to the top of the Nordberg where a huge white cross stands to the memory of the Malgrés-Nous (French for ‘against our will’).

The memorial is dedicated to the 272 men of the region of Obernai who were forced to serve in the German Wehrmacht or in the Waffen-SS during the Second World War.

The panoramic view of Obernai from the War Memorial:

Further away, walk or drive back to town through the vineyards by a place known as “Les Cerisiers” to admire a fine view of the Alsace plain, the Black Forest (Germany) and the cathedral of Strasbourg. The view is best in the afternoon and evening when it is not backlight.

Find out more about Christmas in Obernai.

There are many interesting sites to discover in the vicinity of Obernai.

Obernai stretches at the foot of Mount Saint Odile (760 m), a famous and emblematic mountain in Alsace which is topped by the Hohenburg Abbey consecrated to Saint Odile. The view from the top offers a stunning panorama over the Plain of Alsace as far as Strasbourg.

The Alsace Wine Route from Molsheim to Dambach-la-Ville

This stretch of the Wine Route crosses charming little towns and villages:

Molsheim with its Metzig, a Renaissance town-house built in the 16th century,

Barr and its fine Town-Hall (1640) adorned with a beautiful loggia and a carved balcony.

Andlau, a flower-decked village between the slopes of the Vosges and the Alsace Plain. Andlau is well known for its vineyards and its two ruined castles: the Spesbourg and the Haut-Andlau.

Dambach-la-Ville with its postcard-perfect vista made up of ramparts, church spire, gateways and colourful and flowered half-timbered houses.

How to get to Obernai

The railway station of Obernai is conveniently situated on the Strasbourg-Obernai-Barr-Sélestat line. Strasbourg train station (30km) has train connections to Mulhouse, Frankfurt, Lyon, Basel and Paris.

The closest international airport is Strasbourg-Entzheim (25km), which is serviced by national and European airlines.