You may know Dijon for its mustard, gastronomy, history, and monuments… but did you know that the capital of Burgundy puts on its most beautiful festive clothes for the holidays? To make you want to visit the city, I invite you to discover the Dijon Christmas market and its illuminations. Promise, you won’t forget your festive visit to Burgundy for a long time!

The Christmas market of Dijon is part of a more significant festive event in various locations in the city centre.

Open from 2 to 31 December 2022. Extended until 7 January 2023 on the Place de la République and Place de la Libération. 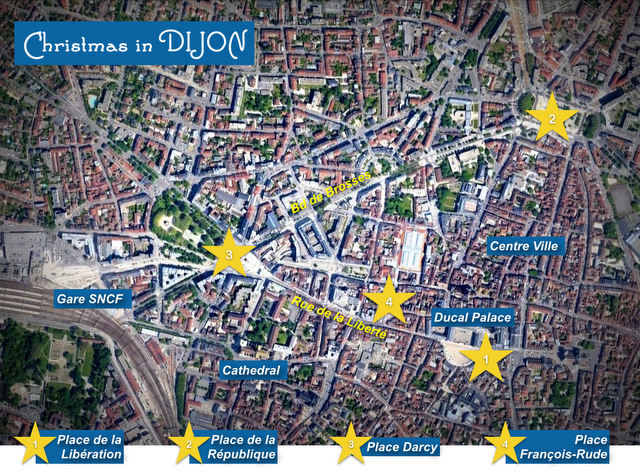 Situated at the vibrant heart of the old town, the semi-circular Place de la Libération was designed as a royal square in the 17th century by Jules Hardouin Mansart and gives the city of Dijon a certain sense of prestige.

The public square is bordered by the monumental Palace of the Dukes and States of Burgundy (Palais des Ducs et des États de Bourgogne). The grand classical façade is magnificently lit during the Christmas season, making it the city’s focal point.

On the Place de la Libération, you will discover an 18-metre-high Christmas tree. It comprises no less than 361 fir trees from the Morvan region, which are arranged to form a single tree.

There is also a double-decker merry-go-round, a children’s favourite!

From 18 to 24 December 2022, the central courtyard of the City Hall of Dijon (Ducal Palace) features a spectacular light show on the three façades of the Ducal Palace. The show lasts 10 minutes and takes place four times: 6 pm, 6.30 pm, 7 pm and 7.30 pm.

Then, on Tuesday, 24 December, at 6.30 pm, Santa (le Père Noël) has a rendezvous with the children of Dijon. Since Christmas Eve 1951, Father Christmas has made a remarkable entrance when he literally “falls” from the top of the lofty 15th century Philippe le Bon Tower. Once safely on solid ground, he rewards the children with papillottes, the traditional French chocolate sweet wrapped in silver paper.

This is one of Dijon’s largest squares, located north of the old town centre, where locals gather on significant occasions. During Advent, a 40-metre-high Ferris wheel spins on the square, transforming it into a winter wonderland. The view from the Ferris wheel offers a breathtaking panorama over the town of Dijon and its surroundings.

In the Christmas village, children can enjoy a ride on a merry-go-round and visit the fir tree labyrinth to post a letter into one of two Santa’s mailboxes (the other one is on Place de la Libération).

Two animation tents are pitched on the square: the first offers all sorts of free animations and degustations centred on chocolate, and the other is dedicated to creative workshops for children, such as Christmas decoration making.

To the West of the old town, not far from the train station, lies Place Darcy and its garden. This transport hub is a great starting point for exploring Dijon. It welcomes a village that is part of the Dijon Christmas market.

At the entrance to the old town stands the town’s triumphal arch, Porte Guillaume. It dates back to the 18th century and opens onto Rue de la Liberté. The pedestrianised street which connects Place Darcy to the Place de la Libération is Dijon’s main shopping area and forms the spine of the town. You will see fine 15th to 18th centuries houses, some half-timbered. In addition, the Dijon Christmas market extends onto Rue de la Liberté.

During the Festive season, the attractive Place Darcy is magically lit up and features a train ride for children.

Between the Place Darcy and the Place de la Libération lies the charming little Place François-Rude, named after a local painter.

The beautiful mansions surrounding the tourist square date back to the Late Middle Ages and the Renaissance, and house tearooms, cafés, bank agencies and fashion stores. The statue of Le Vendangeur (grape-picker) stands in its centre next to a merry-go-round featuring Gustave Eiffel’s famous structures. The square is magically decorated for the festive season.

Often missed by holidaymakers travelling from the north of France and Paris to the sunny Mediterranean provinces of Provence and Languedoc, Dijon is one of France’s most beautiful cities, taking pride in its attractive medieval and Renaissance old centre.

You can observe the rich past of Dijon in an array of historical monuments:

A Christmas walk in Dijon

A Christmas walk will lead you to some unexpected sites, such as the leafy square of Place des Ducs de Bourgogne. You can join a guided tour in Dijon by choosing from a selection of unforgettable tours on the tourist board website.

The historic capital of Burgundy

Dijon was the capital of the influential Duchy of Burgundy from the 11th to the 15th centuries. The town benefited mainly from the reigns of the powerful dukes who also controlled the wealthy Flanders. Using their wealth and influence, they brought some of the finest architects, painters and sculptors to Dijon. They made their capital one of Europe’s most important centres of art, learning and science.

A panoramic view of the city

To get a good idea of the town’s layout, climb the 15th-century Philippe-le-Bon Tower on a guided tour. From the top, you will enjoy an unobstructed view of the Cathedral, the Ducal Palace, the roofs of the old town and the fantastic glazed Burgundian tiles of the Hôtel de Vogüé. In fine weather, the peak of Mont Blanc can also be seen.

Dijon houses several museums: the outstanding Fine Arts Museum (in the Ducal Palace), the art collection of Magnin Museum, the archaeological museum, the Museum of Life in Burgundy and the Museum of Ritual Objects.

It is worth spending a couple of days in Dijon and strolling along the historic streets of the old town. A stay in Burgundy can be extended by discovering the nearby world-famous vineyards of Côte d’Or between Dijon and Beaune.

How to get to Dijon

Basel-Mulhouse Euroairport is 250 km from Dijon (2hrs30 by road).

Other airports are Lyon Saint-Exupéry Airport and Paris-Charles-de-Gaulle or Orly Airports.

A few daily TGV services to Lyon in 1hr45.

Around Dijon: 15 Places to Discover in Burgundy

The Canal de Bourgogne by Boat: Most Beautiful Sites