The unexpected Colorado of Rustrel ranks among Provence’s most beautiful attractions. Situated on one of the largest ochre quarries in the world, the Colorado of Rustrel was, at one time, one of the best known producers of ochre in France. Today, the hues and the strange looking shapes of the outcrops, shaped by centuries of exposure to the elements, are simply breathtaking.

The site of the Colorado of Rustrel

The remains of the ochre quarry are accessible from a large user-pay car park just out of the village of Rustrel along the D22 road. 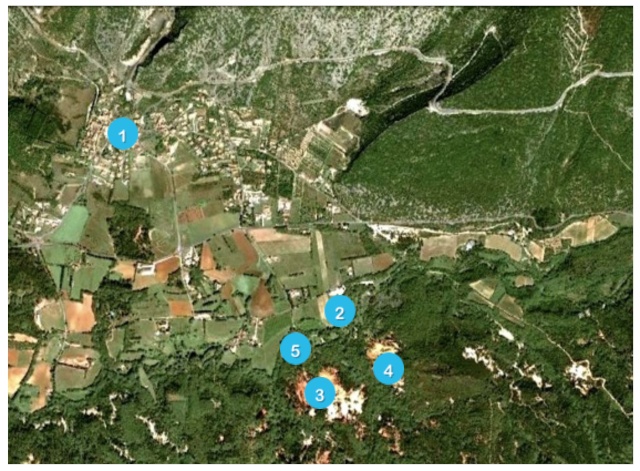 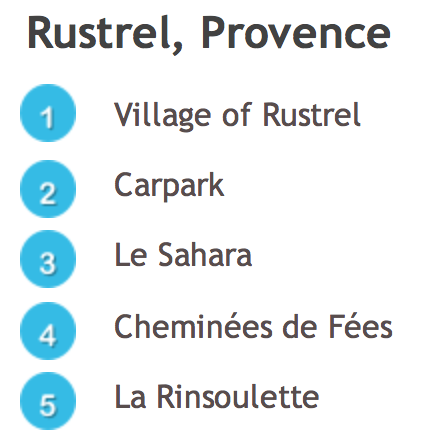 A path leads directly to the site, winding its way around the forest before arriving at the red and yellow sands of the quarries. The landscape is reminiscent of a Wild West movie set. Ochre is a pigment containing 10% iron oxide and a mixture of sand and clay, resulting in an intense colour.

The grandiose site of the Colorado displays up to 25 different colours, varying through white, ivory and orange to crimson, reddish-brown and even violet.

Historic Overview of the Colorado of Rustrel

The quarry was first mined in 1871 when Jean Allemand introduced the first ochre-washing works to France. Out of the 40,000 tons of pigment produced by the ochre industry in 1929, most came from Rustrel.

There were several stages in the process to produce ochre out of sand. First, the sand was washed in the Doa River to separate it from the oxides. The ore was then crushed, washed again and decanted into shallow basins. After a drying stage that lasted for a month, the ore was then crushed to a fine powder.

The site was mined until 1992 when the last worker in the quarry retired. The fortunes of the mining company had declined after 1940 when chemical dyes began to replace ochre for most industrial purposes.

There is still a company mining ochre in the Luberon. It is located in Gargas between Roussillon and Apt: the “Société des Ochres de France”. The Gargas site features 650 m of galleries in the Mines of Bruoux. There, miners carved no less than 40 km of underground tunnels to extract the ochre-laden sand.

Today, ochre is used by building companies for colouring plaster and cement, decorative tiles and roof tiles. Villages in Provence, such as Roussillon, have become famous for their colourful façades, where ochre has been used as “enduit” (the coating covering the outside of a house). This kind of render was popular because it let the stone breathe and, as many houses face south, ochre is resistant to the sun and heat. Ochre is also found in industrial and artists’ paints and also in cosmetic powders and pastes, rubber inner tubes and jam jar seals. It is also found in Dutch cheese rind and sausage (such as Strasbourg sausage or knack).

Walking in the Colorado of Rustrel

These vast stretches of sand can be explored along three main marked tracks, of 2.4 km, 3.8 km and 5.5km in length respectively.

The shortest path leads directly to “le Sahara” after a short hike through a forest of chestnut trees, ferns and truffle oaks. “Le Sahara” is composed of dunes of pure ochre soil with flamboyant colours that blend magnificently with the deep green of the forest and the azure blue of the sky. Roller-coaster paths wind through canyons of all sizes to the delight of young and old, where one can easily make out the different layers of these strangely shaped-rocks. The soil is quite soft and the sand sticks to skin and clothing.

The two other trails pass through columns topped by “pointed hats”, also called “Cheminées de Fées” (Chimneys of Fairies). The colourful hues were extracted by ochre and iron-ore miners and the columns have been shaped over the years by nature’s elements, in particular the Mistral wind.

The three paths also stop at a place where visitors can still see remnants of the once-prosperous mining site, some of them in a ruined cabin: steep pipes, an old gas-driven pump which used to suck the water from underground, sluice gates and settling basins which are reminders of the industrial activity of the 19th and 20th centuries.

When walking in the Colorado, make sure you have adequate shoes and protect yourself from the sun and heat. Stay on the marked paths and don’t wander off as the cliffs are dangerous.

There is a bar not far from “le Sahara” which serves refreshments: la Rinsoulette (which means in Provençal dialect ‘the place where one stops to drink’).

Former ochre quarries can also be visited in Roussillon and Gargas in Luberon. These colourful sites are always surprising, thanks to the different light which plays on the fantastic cliffs and outcrops throughout the day.

Visit the Official Website of the Colorado of Rustrel