Christmas in Lorraine consists of traditions centred around the character of St. Nicholas, locally known as Saint-Nicolas. In Nancy the Patron saint of Lorraine is at the centre of a 40 day celebration with a big parade organised early December. The Vosges mountains with their towering fir trees offer great skiing opportunities while in Metz, a Christmas market – one of the largest in France! – provides a magical atmosphere for the Holiday Season.

Christmas in Lorraine: the tradition of Saint-Nicolas

Saint Nicolas’ Day is mainly celebrated in north-eastern France, in the regions of Alsace and Lorraine. Other celebrating countries in Europe include Belgium, Germany, the Netherlands, and Austria. Saint Nicolas’ celebrations are usually on the 6th December, in commemoration of his death.

Long gone are the days when children used to leave a glass of eau de vie and a plate of carrots for the Saint and his donkey by the fireplace.

The days when Saint Nicolas was the sole distributor of the presents are also fading!

Today, his American descendant Santa Claus (Père Noël) has stolen this role from him. In most towns of North-East France, Saint Nicolas has now retroceded into a giver of lollies and sweets on the 6th December with Santa Claus then giving presents the night before Christmas.

Whether you wish to join the Saint-Nicolas celebrations or visit a Christmas market, there are a number of great places to see in Lorraine.

Over the last two decades, the festivities of Christmas in Lorraine have reached a higher level. The Alsace region, famous for its Christmas traditions, is indeed not that far… and one can see the good influence it has on its neighbours!

Here is a suggestion of places to visit…

The Saint-Nicolas Celebrations in Nancy

In Nancy the festive season starts with the Saint-Nicolas celebrations. They last 40 days from late November to early January. The capital of the Dukes of Lorraine has been placed under the patronage of Saint-Nicolas from 1477. That year, Duke René II won the Battle of Nancy against his rival, Charles the Bold, the powerful duke of Burgundy.

The popular celebrations of Saint-Nicolas are currently in the process of being listed as an Intangible Cultural Heritage of Humanity by Unesco.

40 days of celebrations and one festive weekend

Each year, around the 6th December more than 25,000 people gather in the Place Stanislas for one of Lorraine’s major events. The Saint-Nicolas celebrations in Nancy are usually held on the first Saturday of December, around the 6th, which is the actual Saint’s day for the Patron Saint of Lorraine.

From 3pm, several artistic associations stroll along the streets of the town centre. Their role is to increase the expectation of Saint-Nicolas’ coming, in a festive and playful atmosphere.

Some lucky people may encounter Saint Nicolas at the Christmas market.

The Christmas season in Nancy

Once the Saint Nicolas’ Day celebrations are over, the Christmas season is not done in Nancy. Until the New Year, several activities and events are organised to maintain the magic around the character of Saint Nicolas, the ancestor of the now-famous Santa!

The delightful Place Stanislas is enhanced by a magnificent Christmas Tree in its centre, in addition to other illuminations on Place de la Carrière and along the Grand’Rue in the old town.

On Place Charles III, a Christmas village is temporarily set up in December as a Christmas market. The chalets offers snacks, waffles, mulled wines, as well as gift ideas for Christmas.

?? Read more about Christmas in Nancy.

?? Book your accommodation in Nancy (this affiliate link will direct you to a list of hotels in Nancy by booking.com)

The Christmas Markets in Metz

For the past 2 decades, the Christmas market in Metz has become one of the largest Christmas markets in France in terms of visitors, welcoming up to 2 million people. Like in any towns in Lorraine, Metz celebrates Saint-Nicolas early December.

The city-centre of Metz hosts a number of Christmas sites, including Christmas markets:

The square hosts a gourmet market.

Place d’Armes and the Ferris Wheel

The Cathedral square features a 60 m high panoramic wheel offering spectacular views over the cathedral and the city-centre of Metz.

The Christmas market of Place Saint-Jacques

The Christmas village hosts the Mosl Chalet with amazing local produce from the département of Moselle.

The railway station of Metz is a perfect setting for the great Christmas tree.

The square is bordered by the Opera-Theatre and the Temple-Neuf (a protestant church). Great views of the cathedral lit up at night time.

The enchanting Trail of Lanterns

A magical trail by the banks of the River Moselle.

?? Read more about Christmas in Metz.

?? Book your accommodation in Metz (this affiliate link will direct you to a list of hotels in Metz by booking.com)

Other sites of Christmas in Lorraine

I can’t end this article without mentioning other sites in Lorraine. Although I have never visited them myself, their fame has reached my attention. And I hope that I’ll be able to visit them in a near future!

Inspired about Christmas in Lorraine? Pin it for later: 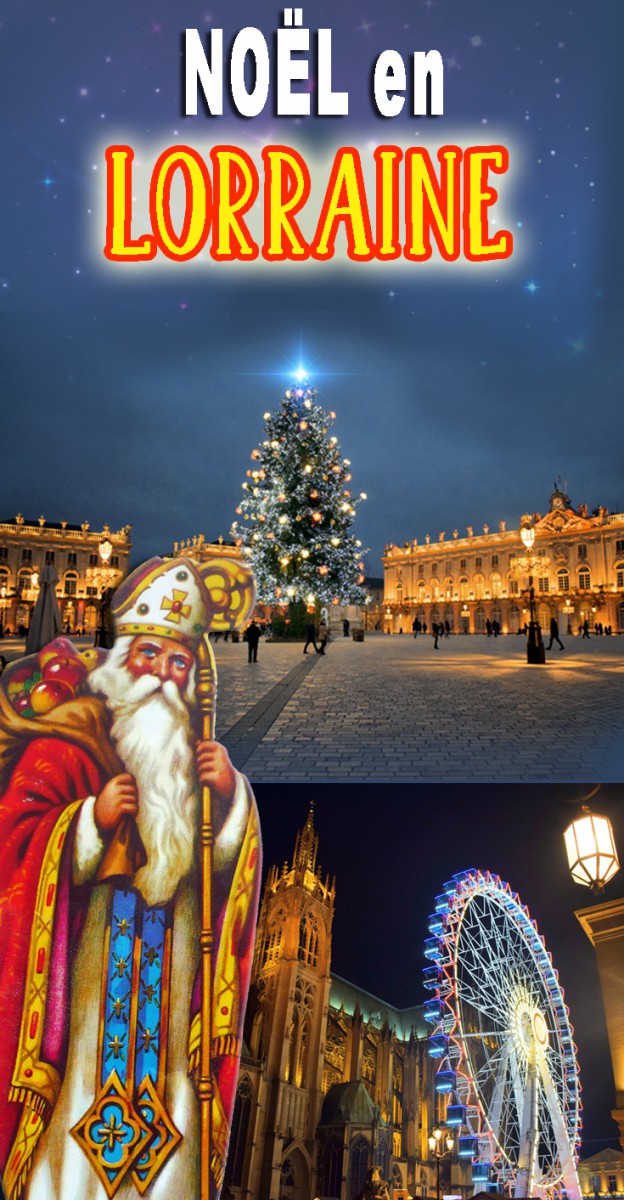 The above links are affiliate links and if you click and make a booking we receive a small amount of commission. It doesn’t cost you anything extra but it helps us keep the blog running and provide quality content for everyone to enjoy.