The Arc de Triomphe in Paris conveys a powerful historic symbol at the centre of the star-shaped “Place de l’Étoile”. It is one of Paris’ most famous monuments, ideally situated at the top of the Champs-Élysées.

Majestically set on top of a hill, the Arc de Triomphe offers the best view of the Historical Axis which runs through some of Paris’ most celebrated monuments and squares:

Buy your online ticket to the rooftop and skip the queue!

The Arc de Triomphe marks the end of the Avenue des Champs-Élysées.

It stands at the centre of a huge square in the shape of a ‘star’, accurately named the “Place de l’Étoile”.

The huge arch is a major stage in the centreline of the Historical Axis of Paris. It is 2.2 km distant from the Luxor Obelisk on the Place de la Concorde.

This celebrated monument is the highest triumphal arch in Europe and stands 50 metres high.

A long period of construction

French architect Jean Chalgrin (1739–1811) designed the Neoclassical monument from the triumphal Arch of Titus in Rome.

This famous Parisian landmark was commissioned by Jean Chalgrin by Napoleon Bonaparte in 1806.

The French emperor once said to his soldiers:

“When you come back home, it will be through these triumphal arches”.

During the Napoleonic Wars, the building was stopped and only resumed in the reign of Louis-Philippe in the 1830s.

Its inauguration took place on the 29th of July 1836. That is only three months before the raising of the Luxor obelisk – another symbolic landmark – in the Place de la Concorde down the hill.

The remains of Napoleon travelled under the arch on the 15th of December 1840 on their way to his final resting place in the chapel of the Hôtel des Invalides.

On the 22nd of May 1885, the corpse of Victor Hugo was allowed to rest the whole night under the arch before being buried at the Panthéon.

The Arc de Triomphe honours those who fought for France, particularly during the Napoleonic Wars.

In the ground beneath the arch is the tomb of the Unknown Soldier (Soldat inconnu) of the First World War.

The Flame of Remembrance

The eternal Flame of Remembrance placed on the grave echoes that of the Vestal Virgins in Rome which was extinguished in 394 by Barbarian raids.

It remembers the soldiers killed in the war who were never identified.

Since 1923, the flame has been rekindled every evening at 6.30 pm by associations of war veterans.

The Arc de Triomphe is certainly a symbolic monument with a strong historic connotation.

Its alignment along the Historical Axis has been meticulously calculated to have the sun setting under the arches on some particular days.

Twice a year, around the 10th of May and the 1st of August, the sun sets on the Historical Axis.

The sun rises towards the East under the arch around the 7th of February and the 4th of November.

The façade of the Arc de Triomphe

The four sides of the façade of the triumphal arch feature impressive bas-reliefs, high-reliefs and friezes describing scenes from the Napoleonic Wars.

The four high-reliefs at the base of the Arc de Triomphe are:

This sculptural group showing the departure of citizens to defend the nation is probably the most renowned and is also known as ‘La Marseillaise’.

The Amazon-type character charging forward with a sword symbolises the Revolution. Note the harsh expression on her face contorted in a fierce rallying cry.

Above the high-reliefs, on the six sides of the arch’s façade are six bas-reliefs depicting important events of the French Revolution and the Napoleonic era:

On the Champs-Élysées’ side

On the Avenue de Wagram’s side

On the Avenue de la Grande Armée’s side

On the Avenue Kléber’s side

Several artists of the 19th century executed the frieze above the bas-reliefs: Rude, Brun, Jacquet, Laitié, Caillouette and Seurre the Elder.

Between the frieze and the top of the monument are a series of thirty shields onto which are engraved the names of major Revolutionary and Napoleonic military victories.

The inside walls and the names of famous French soldiers

The inside walls of the Arc de Triomphe feature the names of 660 people, mostly the French generals of Napoleon.

The names of those killed in battle are underlined.

The shorter sides of the four supporting columns contain the names of the major victorious battles of the Napoleonic Wars.

The battle of Waterloo does not appear there as they do not include the battles which took place after the departure of Napoleon from Elba (1815).

Its 12 avenues radiate out from the Arc de Triomphe, each bearing the names of illustrious French military leaders: Foch, Marceau, Hoche or Kléber…

It is one of the most challenging roundabouts for motorists to drive around!

Haussmann and the square

It was Baron Haussmann who approved the square’s design. It’s the one that gave the square its particular star-like shape that we see today.

The circular square is 120 metres in diameter. Its centre is a star from where 12 avenues radiate out in a remarkable geometric pattern.

Various symbolic places feature the number 12: the 12 apostles, the 12 signs of the zodiac, the 12 months in a year, and the 12 hours in a day or night.

A triumphal arch at the centre of a square from which 12 avenues form the radiating lines of a perfect star. This is set on a stunning historical axis on which various famous landmarks are aligned… Well, what more could a national capital such as Paris ask for? 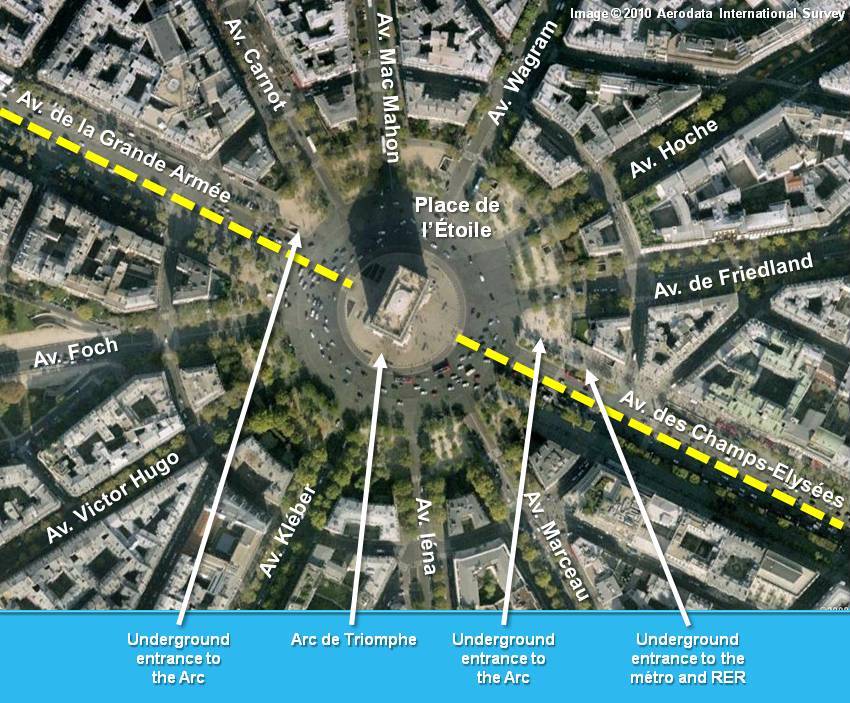 The answer is that with Parisian and French leaders, anything is possible!

President François Mitterrand wished to expand the great perspective beyond the Arc de Triomphe by erecting an even larger, taller and wider monument: the Grande-Arche de la Défense.

Practical information on the monument

On a practical note, you can access the Arc de Triomphe via a pedestrian underground corridor. The tunnel links the north corner of the Champs-Élysées to the Avenue de la Grande Armée.

Buy your online ticket to the rooftop and skip the queue!

The best time of the day to appreciate the fine view is to go up at dusk on a sunny day when most of Paris will then be illuminated with the light of the setting sun.

Here are a few photos I took from the rooftop of the triumphal arch:

The Champs-Élysées to the Place de la Concorde:

Avenue Kléber and the Eiffel Tower

Other views from the rooftop of the arch